Are we addicted to meat?

Lately I've been reading a lot about eating a vegetarian diet.  There are so many sources out there that discuss the negative environmental impacts that come from the meat industry, as well as all the health implications.  There's also the whole disconnect between animals being raised and slaughtered in conditions no one wants to think about when they go into the grocery store and pick out their nice little packaged portion. 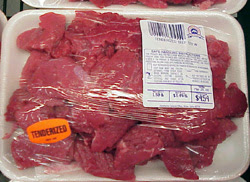 (source﻿)
So I've been ordering vegetarian lately, a veggie saute at the Chinese place, a vegetarian burrito at Chipotle.  And then last night I was at a dinner for a professional society, in a really nice ballroom of a hotel.  When I'd attended similar events in the past, they always asked what your dinner preference was usually giving you three choices, a beef dish, some kind of chicken, and a vegetarian option.  I was thinking about choosing the veggie option, depending on if it sounded good.  But they didn't ask at this dinner, apparently they just assumed everyone was going to be ok with their only choice, a big plate of beef.

Once the beef was in front of me I couldn't turn it down, but one of the guys at our table doesn't eat red meat.  Well I guess they didn't consider this because it took them 20 minutes to produce a vegetarian option which was penne with a generic red sauce.  It looked pathetic on his plate and seemed like a complete afterthought since it took so long to come out.  Didn't anyone realize that some people don't eat red meat?  That some people don't eat meat at all?  I've always read about how it can be challenging to eat out as a vegetarian, but I had never really witnessed it like this. 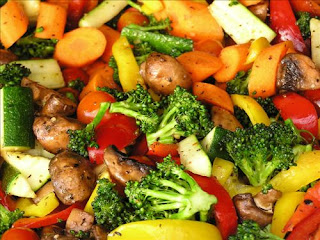 (source)
Now, I'm not sure if I'll ever eat 100% vegetarian, I'm still trying to sort through all of the information.  But whenever I mention anything about a vegetarian diet, more often than not, I get very passionate opposition!  Never eat meat again?!  NO!  It's the end of the world, it tastes so amazing!  I definitely like the taste of meat, don't get me wrong, but if not eating it has such a huge positive impact on the world, helpless animals, and my health, then isn't that worth something?

Are people addicted to meat?  Sometime I feel like I might be, hello bacon!  We hear about the negatives, but would rather not believe them because why, the taste is that good?  Beef, it's what's for dinner.  Are we brainwashed by advertising?  Would we rather live in blissful ignorance, and then die of cancer?  People don't like change, but it doesn't have to be an all or nothing thing.  Every little bit helps and maybe it's time to shake things up a bit.  I'm not saying everyone should go vegetarian tomorrow, but I think people should at least educate themselves and know where their food comes from before it arrives at the grocery store.

Do you know where your food comes from?