Holy crap, I'm training for a half marathon!

Ummmm, who am I?  Seriously.  I thought a 5K was the farthest distance I would ever be capable of running.  I thought double digit miles were for crazy people that were obsessed with running.  I never thought a half marathon would be in my future!

But apparently all these healthy living blogs have sucked me in!  I started thinking about a half marathon a few weeks ago and I googled "my first half marathon recap."  Suddenly I was reading all these posts from people that started out barely being able to run a mile, but they trained and worked their way up to the half.  I read about how rewarding the race was to them, how it changes so many of their lives.  I felt so inspired.

Next I started googling training plans and races in the area.  I was really starting to think, hey I might do this.  Add in even more inspiring race recaps and finding the ODDyssey Half Marathon in Philly.  I started telling people I was thinking about it.  I posted on my facebook that I was debating signing up and I got an overwhelming amount of support!

I want to change my life. I want to push my body and challenge myself. I want to commit to fitness and clean eating.  So today, January 3rd, I officially signed up for my first half marathon!!!!!

The ODDyssey Half appealed to me for many reasons.  It's May 26th so I have a full 5 months to prepare.  Most training plans are around 12 weeks, but expect you to start with running 3 miles multiple times a week.  Because I have an extra 2 months, I have plenty of time to work up to the mileage needed to start a training plan.  I also think the weather in May should be ideal for running (aside from some possible rain).  The race also includes a costume contest, optional fun obstacles, live music along the course, and a pint of beer at the end with a glass I get to keep!

After googling some half marathon training plans, I decided to create my own based on a few different plans and my upcoming schedule.  It's kind of hard to see pasted here as a picture, but it starts out nice and slow and builds up each week.  My biggest fear is to get injured and not be able to train, so I'm going to build my mileage slowly, spend some time cross training, and I know I can afford to skip some runs if I need to rest.  I also added in some races I'm planning on running and some scheduled rest days (for example, I already know I'm not going to do a long run the day after St. Patty's so I put that in the schedule).  My first week of training is this week, starting with 1 mile today! 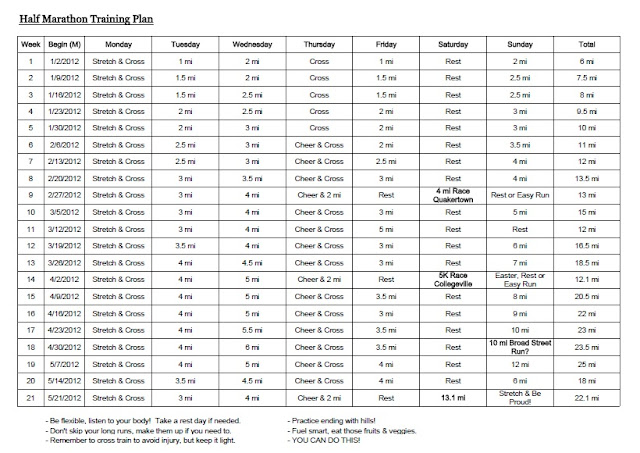 I guess I was a little overconfident, because I did 15 minutes on the elliptical and lifted my arms before my run and then I decided since it was only a mile I was going to try and run it super fast.  Well I ran it in 9:44 and 1 mile kicked my butt.  I had a wicked side stitch halfway through and decided that a huge chicken parm sandwich a half an hour before my workout is probably NOT the best way to fuel.

I have so much to learn!  I'm still pretty intimated by a lot of things.  Am I running in the right sneakers?  Do I want to purchase a Garmin?  How will I fuel during long runs?  But I know I will figure things out as I go and I have so many resources at my finger tips!  The blog world has given me so much inspiration and I can't wait to share my journey!

Seriously, have I lost my mind?  Do you like racing?  Have you ever done a half marathon?  Do you have any tips?
Posted by Amber at 10:05 PM