2 runs outside in January?!  3.85 and 4 mile runs?!  Aw yeah buddy.  This week was mixed with awesomeness and some disappointment.

Disappointment:
- Tuesday I thought, oh I ran 3.5 miles last week, 2 will be a breeze, I'm going to try and do it a bit faster.  I felt like crap!  I even had to walk part of the second mile.  I think it was a combination of things like starting out too fast, lack of fueling (I had pizza for lunch and nothing for hours before running), and dehydration.  I was having so many good runs that I thought I'd never hate running again and then this run totally owned me!
- I finished my run Tuesday night with some pain in my hip.  I figured my hip flexor was a little sore, no biggie.  But when I ran on Wednesday, it really started to hurt.  I wanted to run 4 times this week, but when walking hurt my hip on Thursday I decided to skip running Friday to rest.  I think it was a good decision, but I was still disappointed.

Awesomeness:
- I met up with some ladies from the running group I found on the internet, Ladies Who Run, for a trail run Wednesday night.  Before the run I was SO nervous.  I hadn't run with a group since I quit lacrosse in 9th grade!  I was worried they were going to be too fast for me (even though they posted the pace on the event invite), that I wasn't going to click with a group of people that were already friends, that I was going to hold them back, and that I might pee myself during the run since my nervous bladder was betraying me beforehand and I was stuck in traffic so I didn't get to stop at the Wendy's next to the meeting location.  When I got there my nerves were first calmed by the bathroom in the meeting place!  Thank goodness.  Then once we started, all of my worries vanished.  The pace was perfect, the women were great and gave me tons of running tips, and the miles ticked by with ease.  I loved running with this group and I will definitely go back!  This will be such a great resource, especially when my runs get longer and longer.  Who wants to run 10 miles alone?  Not me!
- I bought another pair of compression pants.  2 out of the 3 pairs I bought at Old Navy are capris and they're fine for the gym, but if I'm outside and it's under 50 degrees I want long pants!  They were 17 bucks at Ross.  I also bought a long sleeve shirt and a heavy duty sports bra at Target.  The shirt was only $15 but the bra was $23.  My girls need to be supported and I usually wear 2 cheap bras, but I think it's time to upgrade my life.  Yay for cheap running gear!

So I've been training for four weeks and I'd been thinking about getting some new running shoes and with the pain I experienced this week, it seemed like it was finally time to make it happen.  I'd heard great things from multiple people about North Wales Running Co. so I decided to check it out.  Apparently my feet are pretty neutral, but I have a little bit of pronation in my right foot, which could have caused my hip pain. After trying on six different pairs of shoes and spent time in each walking around the store and doing some running on the treadmill there, I finally decided on these bad boys! 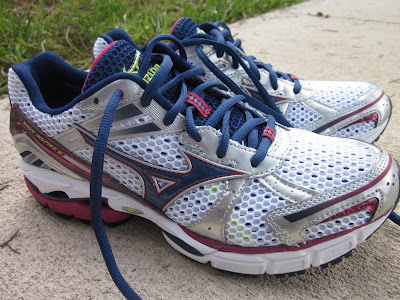 They are the Mizuno Wave Inspire 8 and I'm in love with them.  I can't wait to go for a run!  I spent 115 bucks, which is definitely the most I've ever spent on a pair of sneaks, but I think they'll definitely be worth it in the long run (pun intended?!) and hopefully help me avoid injuries!  I also picked up some fancy sweat wicking socks.  The man who helped me at the store was awesome and I had a great experience!

Do you splurge on your sneaks or do you look for what's on sale?

Read more about my training here.
Posted by Amber at 6:41 PM