I sadly don't have a half birthday since February 31st isn't even close to existing, but Vienna celebrated hers two weeks ago with lots of excitement!

She had previously rolled over a few times here and there, but the night before she turned 6 months she finally put it together and was suddenly a rolling master!  She can roll both ways and really cover some ground but sometimes gets stuck on her belly.  She's a lot stronger on her tummy than she used to be, but if she gets stuck for too long she gets pretty mad about it.  I think she really wants to crawl and gets frustrated when nothing is happening.  She's started slithering backwards a little bit but to be honest we're not in a rush for her to get moving.  We are already realizing that our house isn't quite baby proof yet! 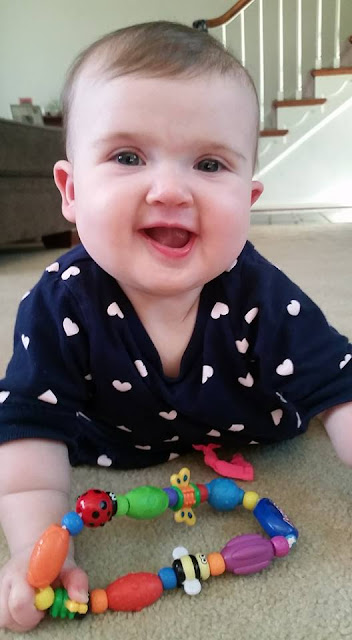 She's just about sitting up by herself, but is still quite wobbly.  She does well in her PB chair and highchairs, but still does some face plants solo on the ground. 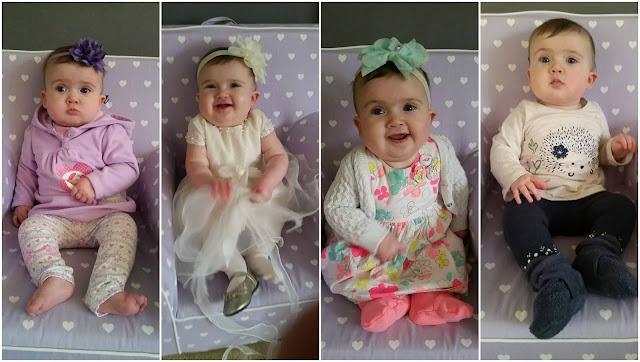 We had her 6 month appointment a week ago and she was 17 lbs 9.5 oz (74th percentile) and 26.77" (80th percentile).  Her length is down from the 90th percentile where she's been, but I also know that length is the most inaccurate measurement since it all depends on how straight she lays and how much they push down her leg, etc.  We just had to put away all the 6 month clothes and some of the 9 month clothes look stupidly small, so she's actually wearing a mix of 9 month and 12 month stuff now. 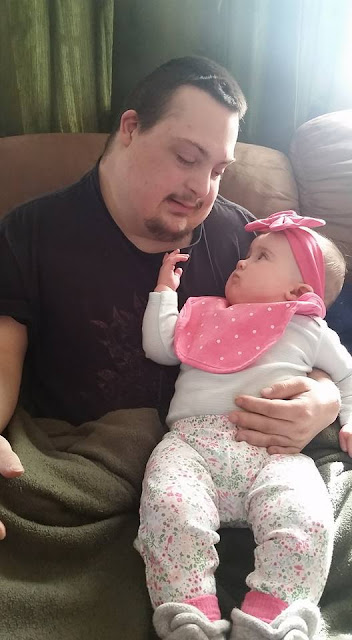 We also had a follow up with the orthopedic doctor on Thursday.  It was suspected that Vienna may have hip dysplasia back in December, but after 2 rounds of ultrasounds and 3 appointments with the ortho, she has officially been cleared! 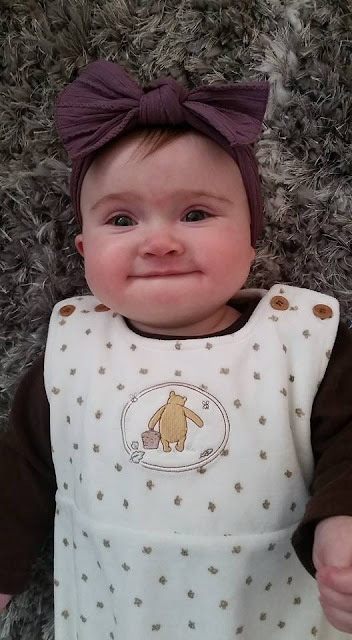 We started working on some sleep training this past week.  Vienna was a great sleeper when she was 3 and 4 months, but the 5th month was rough.  She went from sleeping 4-8 hours in a row to 0.75-2 hours.  Mama was struggling.  We endured and her sleep has improved, but it's still not great and we knew we had to work on putting her down "drowsy but awake" vs. nursing her to sleep.  The first night was rough, she cried for 20 minutes and my heart ached every second of it.  But the next night she cried for 5 minutes and 10 minutes later she was asleep!  We've had mixed results, but I think we're headed in the right direction and hopefully she will be a self soothing master soon. 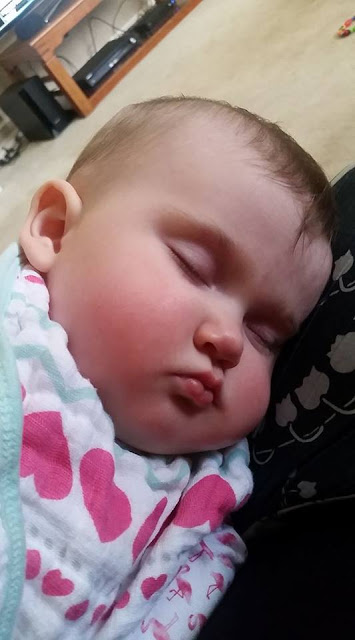 Another new fun thing that we started this week was food!  We are going with a Baby Led Weaning (BLW) approach so we are skipping purees and going straight to chunks of soft food that Vienna can feed herself.  A ton of people have looked at me like I have two heads when I tell them about it (including Dave at first), but there's tons of information on the internet and so far it's going great! 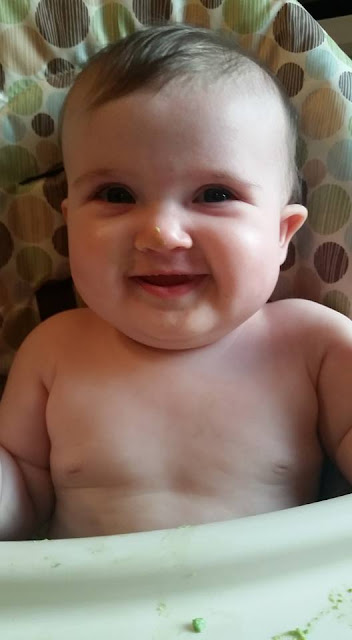 Our first attempt was avocado.  She brought it to her mouth and tasted it a tiny bit, but she definitely didn't eat any and wasn't that interested in general.  I'm not sure she enjoyed the slimy texture on her hands.  I went in with really low expectations, so I was just happy we got some cute pics.

The next night we tried some more avocado, but it was a fail.  We decided that she sat in the highchair for too long beforehand and was already over the whole thing before we even offered the food.

Night three was some steamed broccoli.  I was starting to wonder if she just wasn't really ready yet, but she was super into it!  She was putting it in her mouth, waving it around, and cried for more when she dropped it.  She did gag once or twice, but it's all part of the process and it was very brief and not scary. 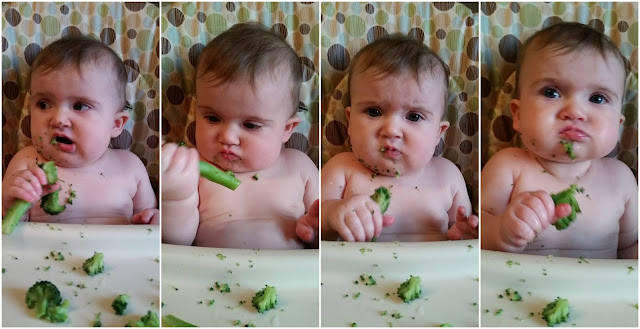 Since then she's done purple sweet potato and broccoli both a few times and she's figuring it out slowly but surely.  We didn't think she was actually really eating any of it, but apparently Daddy found some broccoli evidence in her poop haha. 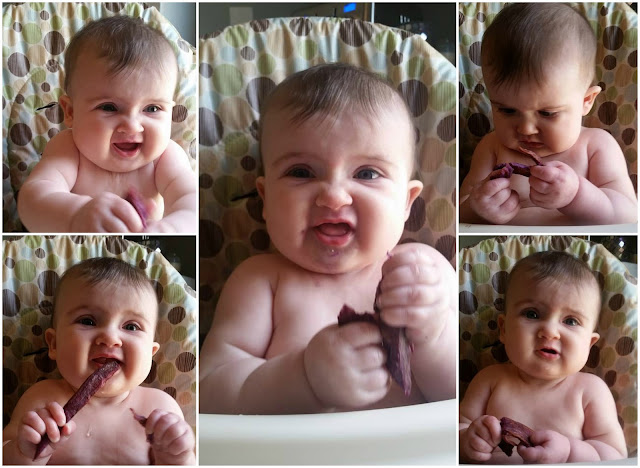 Her faces don't really agree, but I promise she has been enjoying it!

I feel like I blinked and half a year flew by.  I cannot even fathom what she's going to be like in another 6 months!