To be honest, a good hoagie roll is one of the few things I'm not sure I'll ever fully give up.  I could totally live without ever having a crappy grocery store hamburger bun for the rest of my life.  But a fresh Philly roll... chewy on the outside, soft on the inside... well, they still get me!  But as my wedding approaches (23 days!!!) I've been trying to bump up my veggie intake and avoid those evil processed carbs.  Enter stuffed peppers! 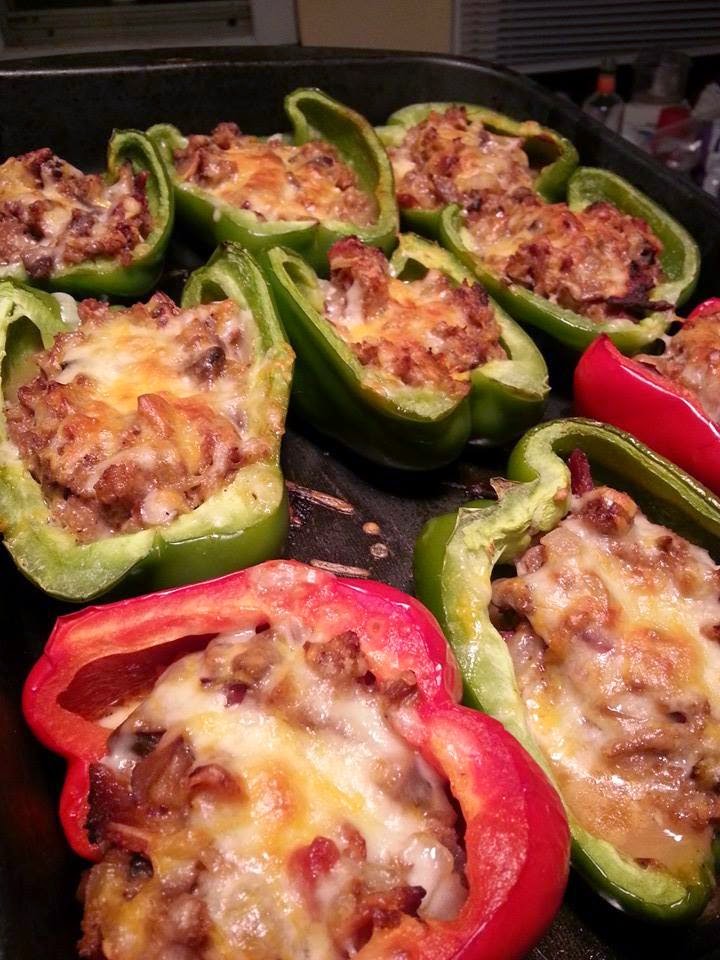 I was kind of bored in the kitchen so I hopped on Pinterest and rounded up some old faves that I forgot about and also some newbies!  I had pinned this recipe a while ago and never got around to making it.  I wish I could say I came up with the idea, but I did some tweaking and made it my own.  The other day I was clicking around on my blog and I realized pretty much all of my recipes are from my pre-Paleo days, so I guess it's time to fix that!

Directions:
1.  Cook the bacon in a large pan over medium heat until done to your liking.  Remove and chop when you have a chance. 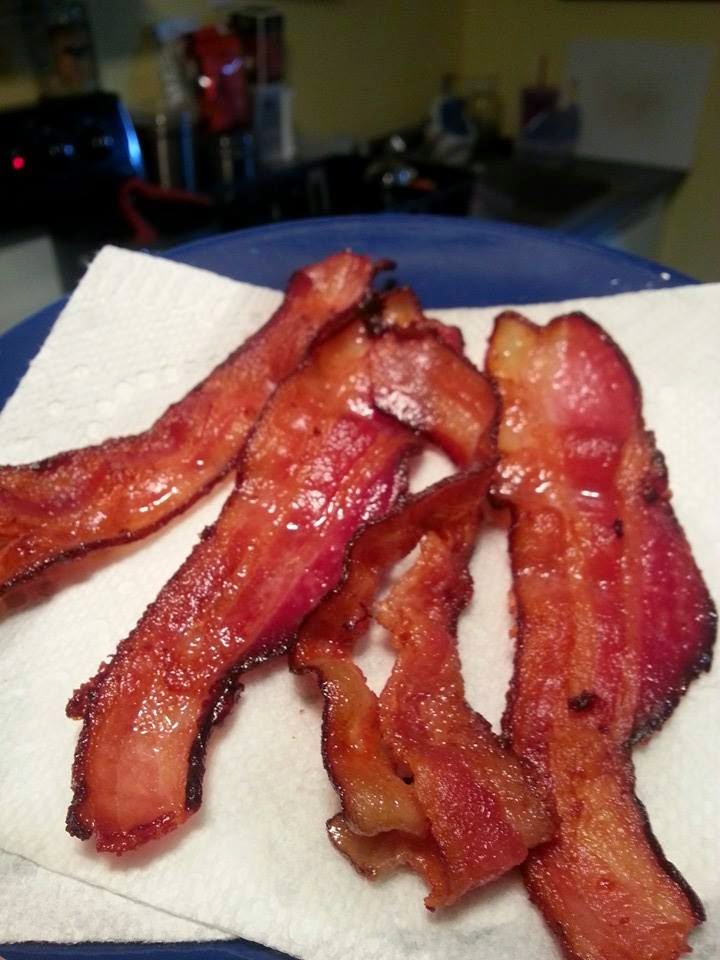 2.  Dice the onion and plop it into the pan so it can fry in the bacon grease. 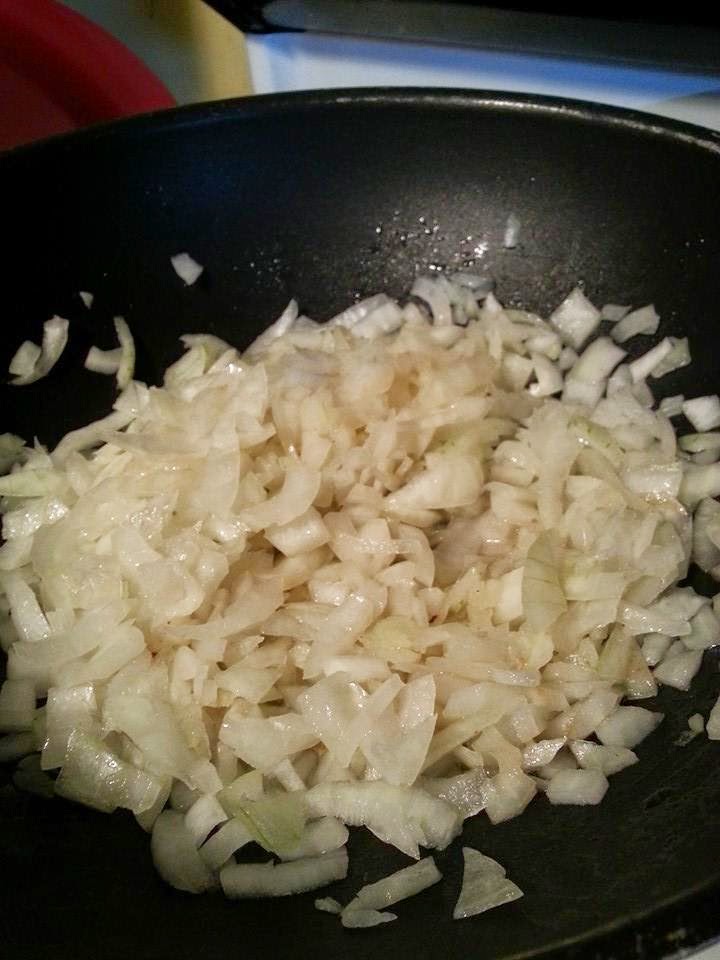 3.  While the onions are cooking, cut the bell peppers in half, deseed and devein them. 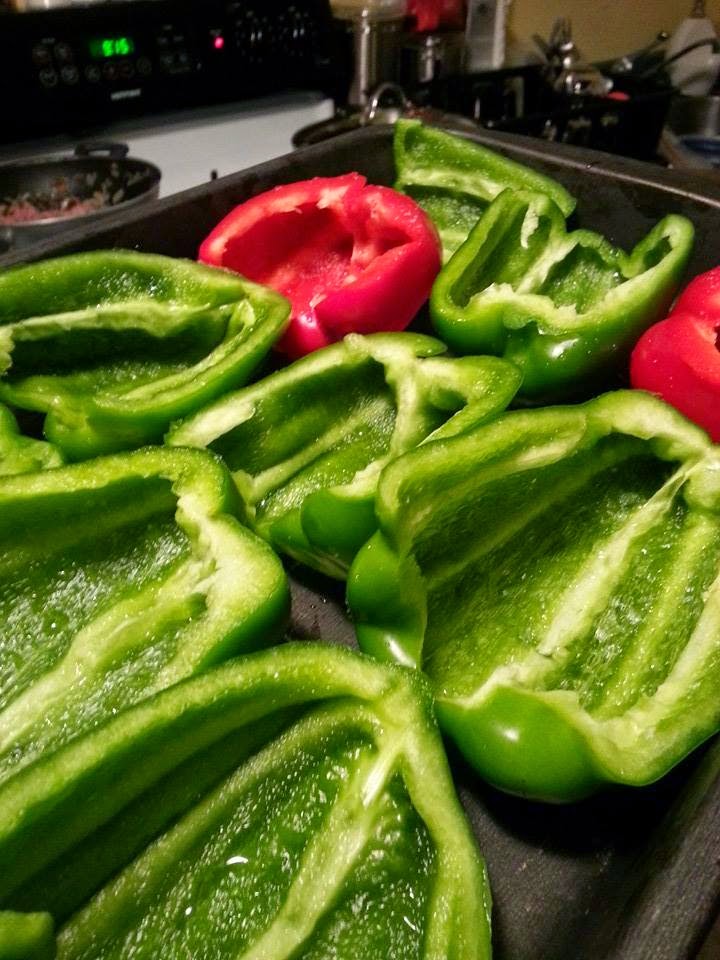 4.  When the onions are almost cooked, add diced mushrooms and cook for an additional 5 minutes. 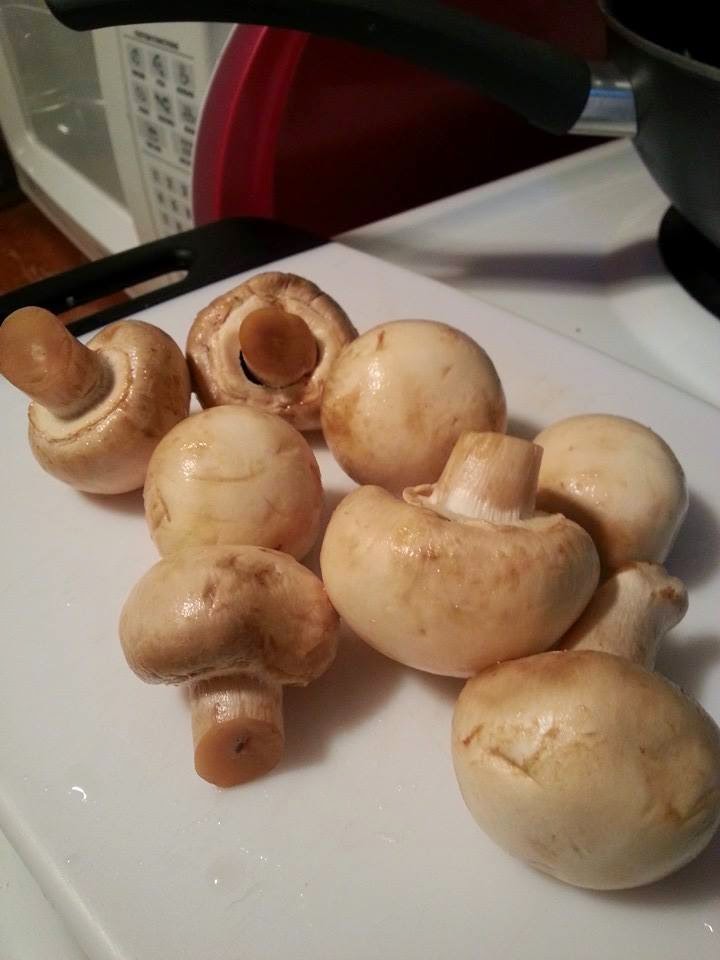 5.  Preheat your oven to 400 degrees.
6.  Add the beef and cook until meat is browned, pulling meat apart as it cooks. 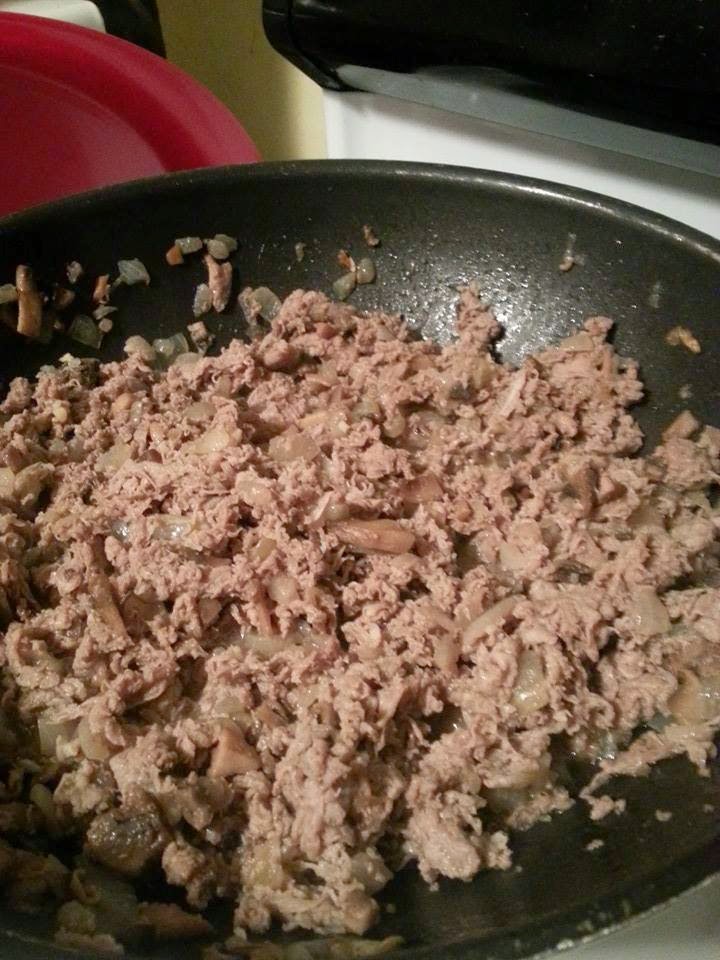 7.  Add garlic (I used ~1 tsp), salt, pepper, garlic powder, tomato sauce (I used a chunky mushroom tomato sauce I already had in my fridge from Wegmans), and cheese to taste.  And don't forget that bacon!
8.  Arrange the bell peppers in a large pan.  Use a slotted spoon to transfer your awesome meat/veggie mixture into the bell peppers.  Top with more cheese!
9.  Stick the pan in the oven for 20-25 minutes or until the cheese starts to brown on the top. 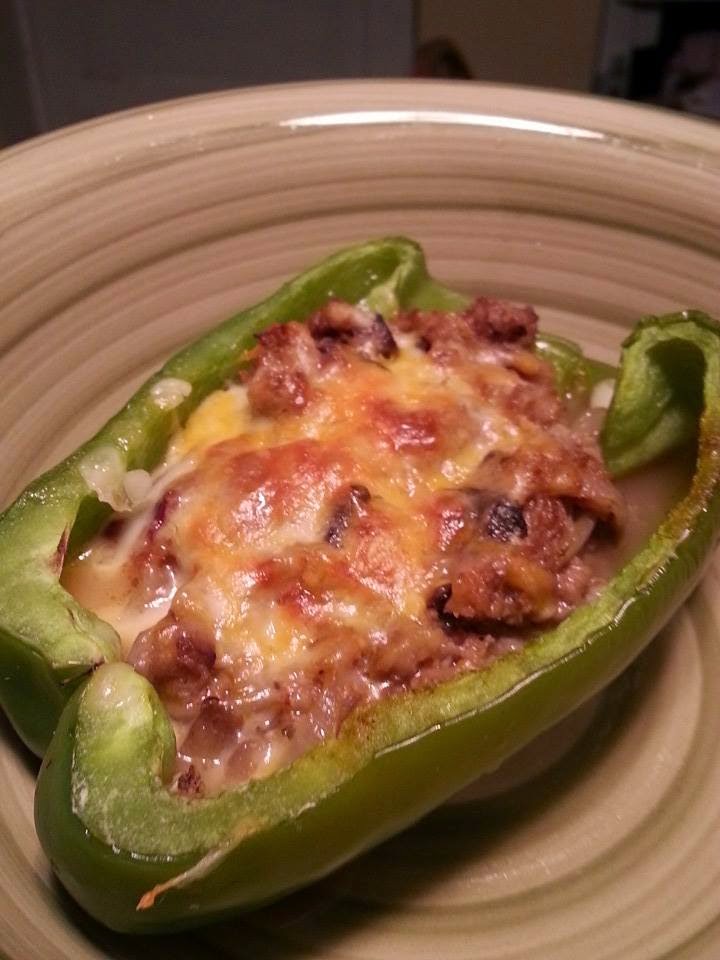 Some notes:  I made this with 5 peppers and I wished I'd only used 4 so I could've filled each one to the brim.  We had company over, so I actually wish I had just doubled the entire recipe, so everyone could chow down (which they did) and we would've had an abundance of leftovers (which we did not).  I love cooking in large quantities to enjoy the leftovers for lunch or on a lazy evening.  Also, with the cheese they are not strict paleo, but you could easily omit it.

How often do you try new recipes?

So we're 28 days away and the wedding nightmares have begun.  Last night I had a dream that we were getting married in a grocery store. And in the final moments before my walk down the aisle, I couldn't find my shoes. And then when I came to terms with the shoe thing, I found my sister dressed in jeans and a shirt, buying donuts for the next morning, telling me she had to check her email before the ceremony could start.  What the heck is going on in my head? lol! None of those things even have a chance of happening (ok maybe I could forget my shoes... but I certainly won't be walking down aisle 5 next to the canned goods)!  Honestly, I'm not even feeling super stressed but apparently my subconscious is feeling a little differently.

Anyway, Happy Saturday!  Since my test was last Friday, I've finally been able to relax this week (as much as you can when your wedding is a month away).  I organized, got together with friends, and I enjoyed the awesome weather.  And I actually took some photos! 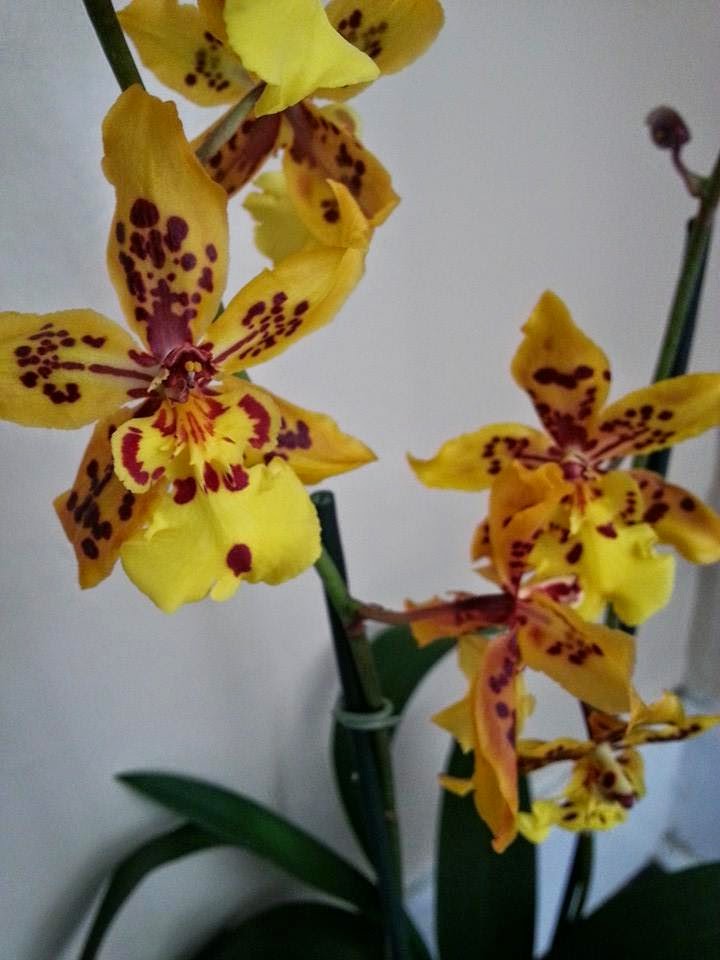 A beautiful orchid from Megan!  I am completely terrified of killing it. 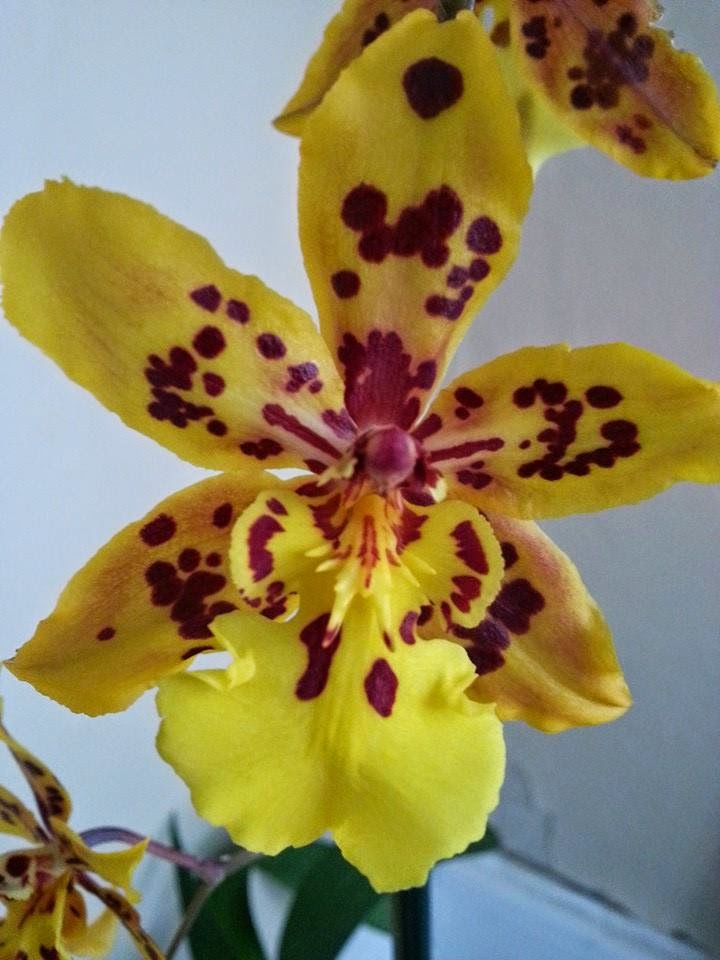 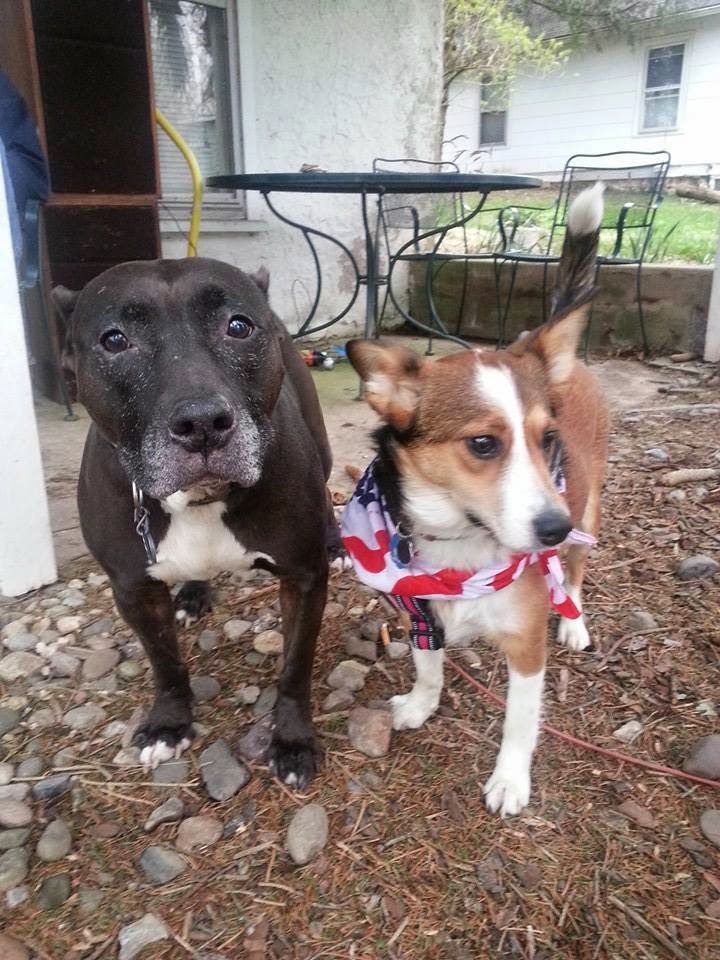 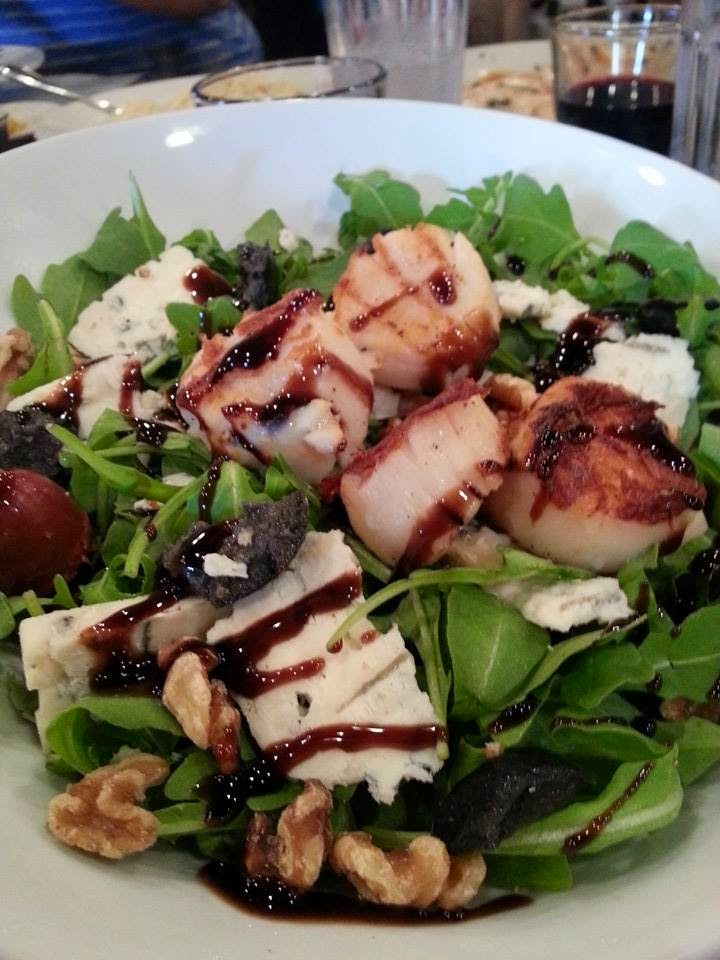 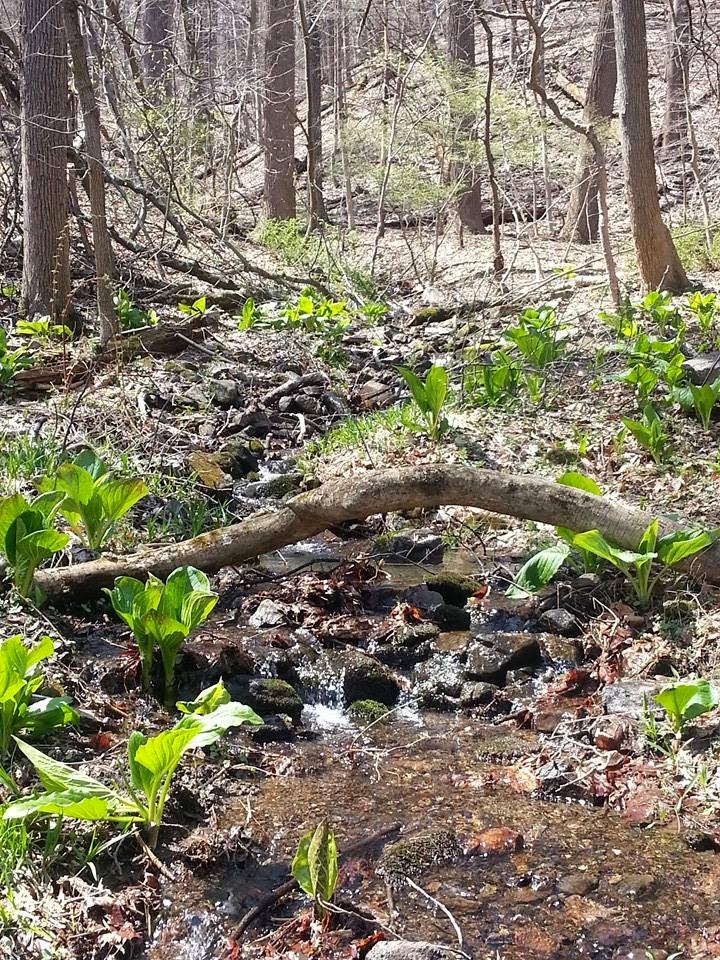 Spring has sprung in Valley Forge! 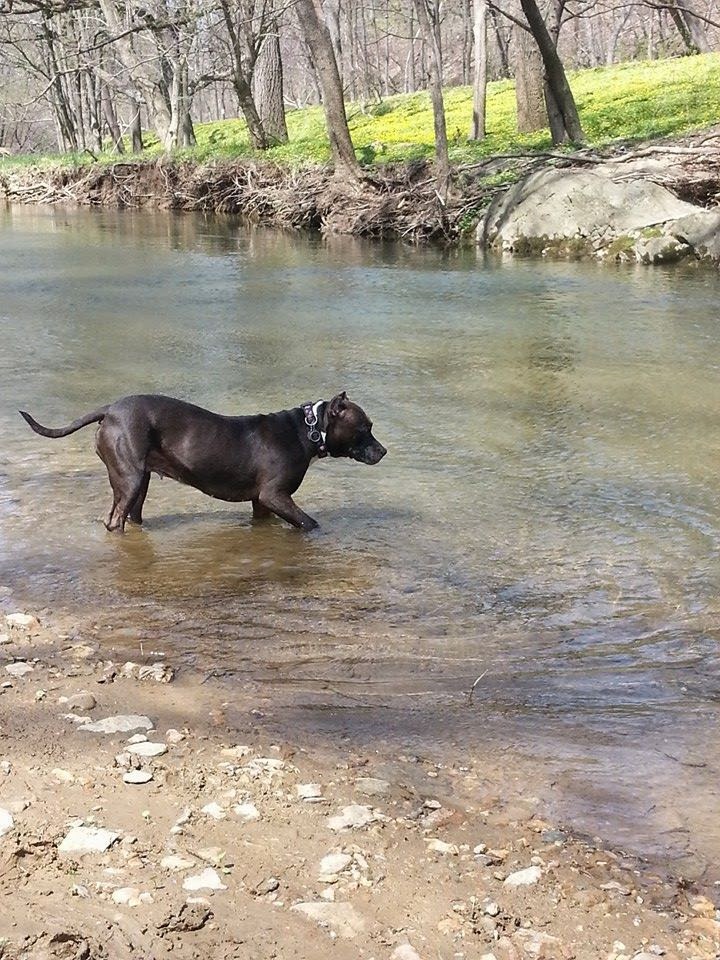 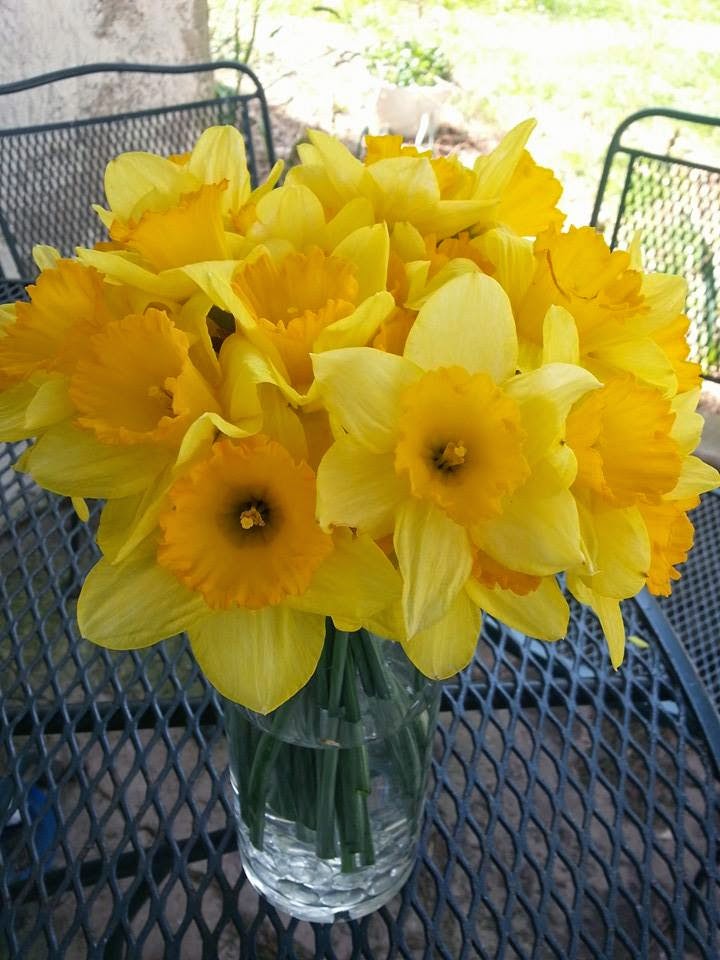 I may or may not have stolen these from the vacant house next door ;)

I hope you're having a fabulous weekend!  The rest of ours will be spent doing yard work, enjoying a beautiful Easter service, and having a Folk Fest reunion lunch complete with egg dyeing and mimosas.

PS - Check out these super creepy Easter bunnies for a good laugh or possibly some nightmares!

I wanted to start the week off strong, so I decided to hit the gym at 6 am Monday morning!  I keep thinking getting up at 5:30 has to get easier sometime, but it really never does.  I can only make it work if I have everything packed ahead of time, so I always do that the night before now.  Otherwise, it's too easy to talk myself out of it while I'm laying in bed, especially if I check the website on my phone and hate the workout!  But once I get to the gym and warm up, I'm good to go.

I finished 6 rounds + 5 deadlifts. The workouts I did last week were pretty brutal, specifically Thursday's 21 minutes of death by double unders, so 8 minutes really flew by. I was really excited about my HSPUs! I started the workout feeling kind of iffy about them. I'm pretty good at handstands (some of the guys at the gym actually call me a show off) but I hadn't done any HSPUs in a while. I struggled on my first few, so I added a second ab mat under my head to give me a boost. Throughout the workout I really gained my confidence and the last 5 were actually my best ones! 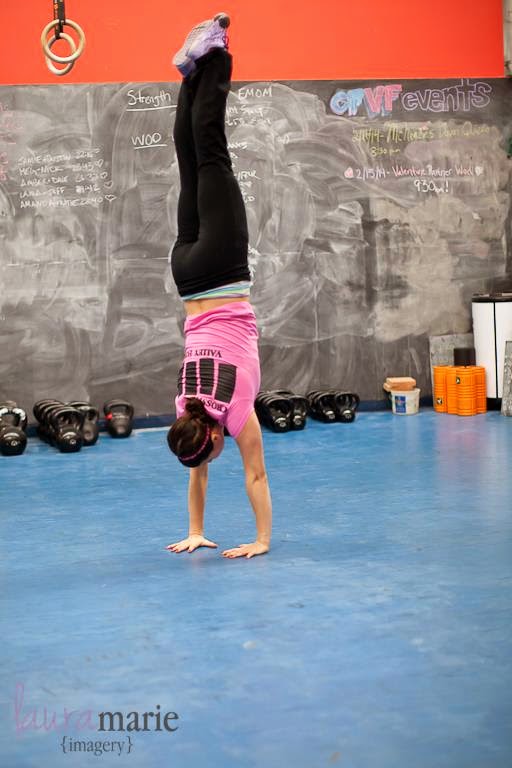 It's the best feeling having my workout done before I even start my day!  Unfortunately the rest of my day didn't go as great.  I hadn't really drank much coffee the week before, but I decided it was Monday and I wanted a cup.  Well I'm pretty sure it was the cause of the terrible heartburn I had for the rest of the morning.  Then my throat started to hurt and before long my entire body started to ache.  I just kept thinking, I cannot be getting sick right now!  Next Friday I am taking an 8 hour exam to further my career and the wedding is 1.5 months away.  I really didn't eat the healthiest all weekend and my neighbors were sick, so I guess it wasn't that big of a surprise.  I went out to dinner with family to celebrate my mom's bday and by the end of the meal, I wanted to lay down in the booth.  I came home and went to bed at 8:30!

So today is a lot of this. 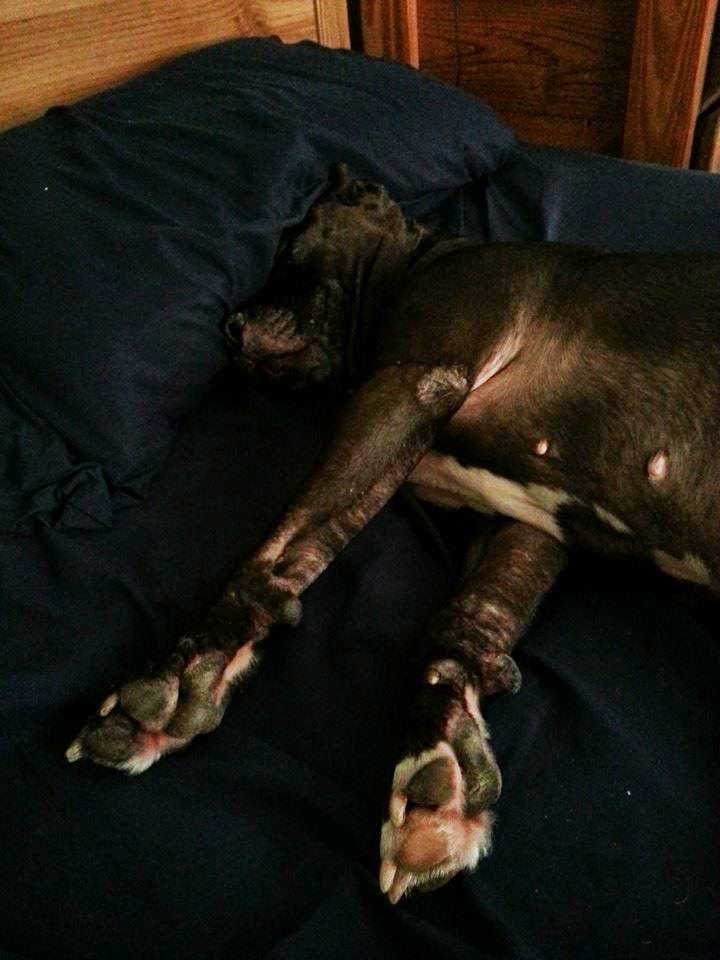 I'm definitely going to spend the day resting and recovering.  I'm also hoping to get some studying in and maybe even a load of laundry.  And if it actually reaches 62 degrees like it's supposed to, maybe I'll even sneak in some time in the sun.  The vitamin D will make me feel better, right?

How's your week starting off?  Hopefully better than mine <3
Posted by Amber at 11:55 AM 3 comments: