My goodness this past week has been a rollercoaster.  Celebrating our pregnancy with all our friends has been one of the highest highs, but this week we were also forced to face a devastating low when we decided it was time to put Butler down.  Thankfully, his health made the choice for us and he is no longer suffering.  My heart aches every day, but I know he had a wonderful life with us!

With the good, we must take the bad.  And these days there's a lot of good.  I'm 1/3 of the way through my pregnancy and I honestly still can't believe it.  I updated this post as the weeks went by with random things that were going on, so here's a little recap of my first trimester! 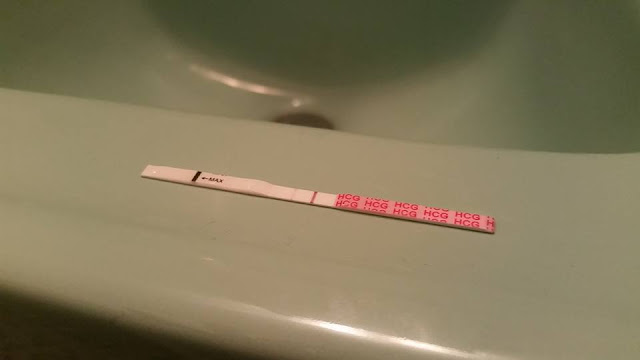 1/19/17 - I became obsessed with taking pregnancy tests.  I took two more the next day and the line kept getting darker.  I surprised Dave with a tiny orange tie dye onesie and when he opened it he said "it's cute" with no reaction.  I kept staring at him with some crazy eyes and finally he figured it out and got super excited!  My only symptoms are tender breasts, a little bit of light cramping, and the frequent peeing thing is definitely real.  I'm also feeling kind of bloated, but still feeling more slender than when I started my Whole35. 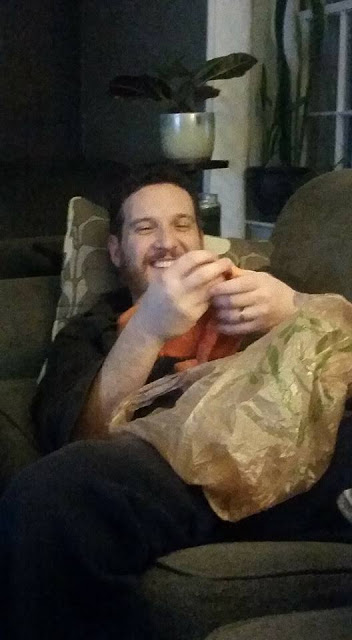 1/21/17 - I gave my brother a birthday card that said "Uncle" on it.  My dad read it out loud and Michelle got it immediately.  Her face was so funny!  My parents took a little longer, apparently they thought we were calling Tom an uncle to the pups.  Once everyone figured it out there was lots of excitement and some tears!

4 Weeks
1/23/17 - I'm wondering how long I'll be able to keep the secret since I'm blogging about how I feel every day, especially if I start to experience morning sickness.  I'm also feeling like it's going to be obvious at the gym, since I'm now trying to keep my level of effort at 70%.  It's honestly pretty hard to sandbag the workouts that much haha.

1/24/17 - I didn't realize how bloated I would be.  My tummy is not reflecting the fact that I've been rocking my diet for the past two weeks.  I'll just pretend it's a bump.

1/25/17 - Dave called his mom to invite his parents to dinner so we could tell them the big news.  Robin said "what's the occasion?" and Dave replied "we have big news" (idiot).  She guessed immediately.  Surprise ruiners, both of them!

5 Weeks
1/30/17 - Went to a networking event with an open bar and was discussing future family plans with an old friend when he said "You're obviously not pregnant now since you're drinking!" I'm glad I asked the bartender to put my club soda in a cocktail glass haha.

2/1/17 - I'm feeling kind of nauseous and all the leftovers in my fridge sound disgusting... wondering if I've officially made it the morning sickness phase.

2/3/17 - Day 26 of my Whole30 and I officially quit.  I was so nauseous and the idea of cooking veggies made me want to throw up.  We ordered pizza for dinner and I felt pretty guilty, but it was also the best thing EVER.

6 Weeks
I've been super nauseous all day, every day for the past week.  Brushing my teeth in the morning makes me gag.  Fun times.  I have no desire to cook and I hate everything in my fridge.  Takeout, for the win!

7 Weeks
My pants are starting not to fit.  I've definitely gained a few lbs (which isn't exactly a surprise since I'm basically only eating carbs & cheese...)

8 Weeks
I had my first appointment and everything went GREAT!  The baby measured as expected and we got to hear the heartbeat (which made me cry)!  I was so nervous leading up to this and it was such a relief to know that everything is going well.  We mailed announcements to our extended family. 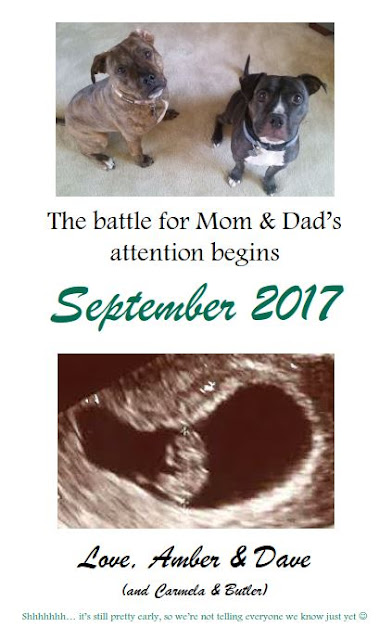 9 Weeks
I thought the nausea was going away and then it came back with a vengeance and I finally threw up.  Twice.

10 Weeks
The exhaustion is so real, especially after lunch.  I have to fight the urge not to take a nap at my desk every day.

11 Weeks
The on and off all day nausea has definitely subsided, now only certain things set me off.  Little mints are my best friend.  I'm starting to come around to real food and even bought some raw meat & veggies at the grocery store.

12 Weeks
We got to see the baby two days in a row!  The first time was at the hospital and they checked the neck thickness, which is a marker for Down syndrome.  The ultrasound tech said everything looked great. 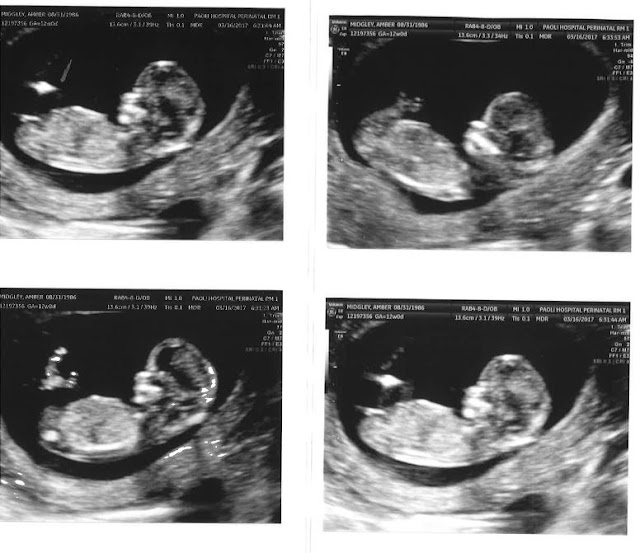 We saw Baby Midgley again the next day at my 12 week OB appointment and it was upside down kicking it's legs in the air.  We said it was doing a jig for St Paddy's Day.

13 Weeks
Because Tom has Down syndrome, I'm "high risk" in the insurance's eyes (which my OB said I'm really not) so I was approved for the fancy new genetic test called Non-Invasive Prenatal Test (NIPT).  This means I only had to have my blood drawn once at week 12, instead of twice at 12 and 16 weeks for the standard Sequential Screen, and it is more reliable (less false positives).  Oh and it will tell us the gender super early!  The OB called and told me everything looks normal!  Yay!  What a relief.  They are mailing us the gender results so I can give the envelope to a baker for a gender reveal cake surprise :) All my friends think it's a girl.  I really haven't had any special feelings about it.  I've only had one baby dream and it very closely resembled the birth from the end of Breaking Dawn (aka I'm having Edward's vampire baby)...

And now the first trimester is wrapping up!  The nausea has definitely subsided (except for when I smell something that doesn't agree with me) but the mild headaches have started.  I'm definitely starting to get a bump and maternity pants are looking pretty appealing.  I guess I need to take my first bump pic! 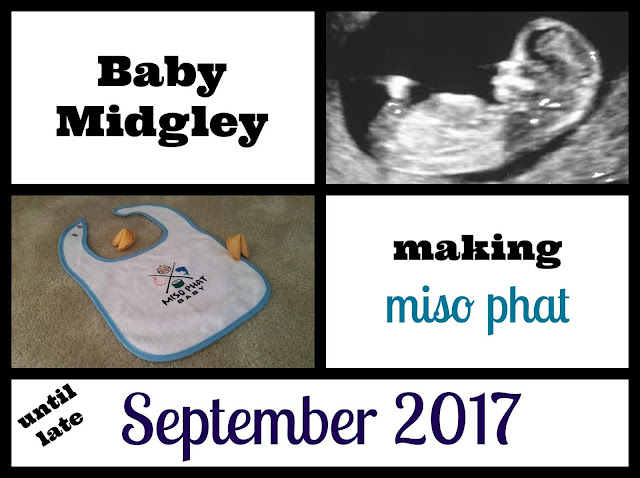 When we last left off, I was in the middle of my Whole35 and I abruptly stopped blogging without any explanation... well I was super nauseous ALL the time!  On Day 26 I said screw this and ordered a big cheesy pizza!  I'm not exactly proud to tell you that the next month and a half was just carbs, carbs, and more carbs, but that's really all I could stomach.  Even the thought of vegetables made me sick.  Now that I'm hitting the second trimester, I'm feeling a lot better but I'm still really hit or miss with certain foods and haven't had a lot of desire to do much in the kitchen.

Baby Midgley is due on September 28th and I'm honestly still in shock.  I'll post more about baby soon!

In not so happy news, Butler was diagnosed with lymphoma right at the beginning of the year.  They told us 3 to 6 months and we were seeing small changes in him, but for the most part his demeanor was unchanged... until this past weekend.  He was throwing up, refusing his meds, and very lethargic.  Our vet gave us some special food that we've been mixing with water to make into a baby food consistency and his medicine in liquid form so we can give it to him via a large syringe.  He seems to be doing a little bit better today, but we're just trying to give him all the love we can because I think our time with him is pretty limited. 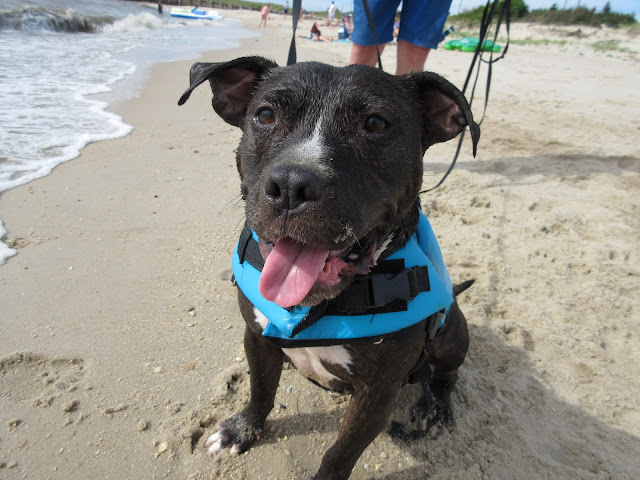 So many things to post about, I hope to be back soon.