I started Week 26 with a fun photo shoot at the gym.  I've been loving the Transformation Tuesday stories that my coach has been sharing and felt honored to be featured! 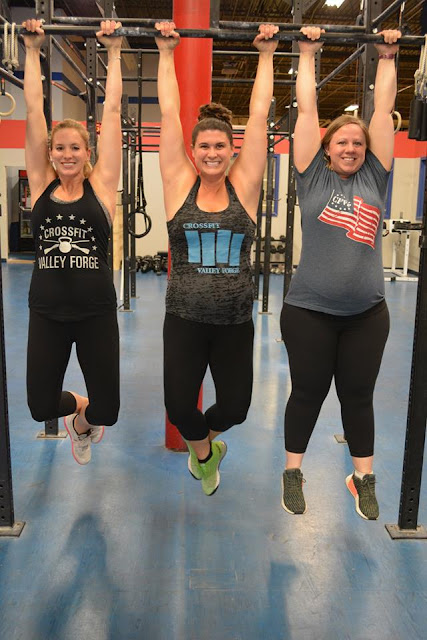 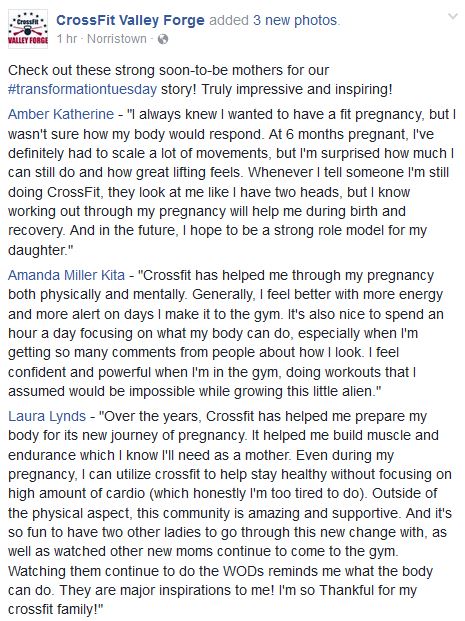 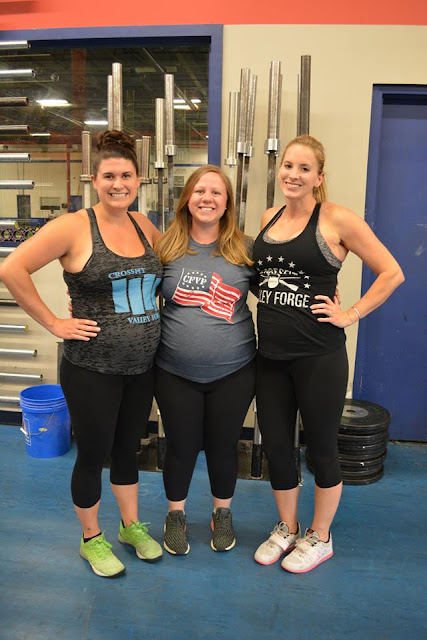 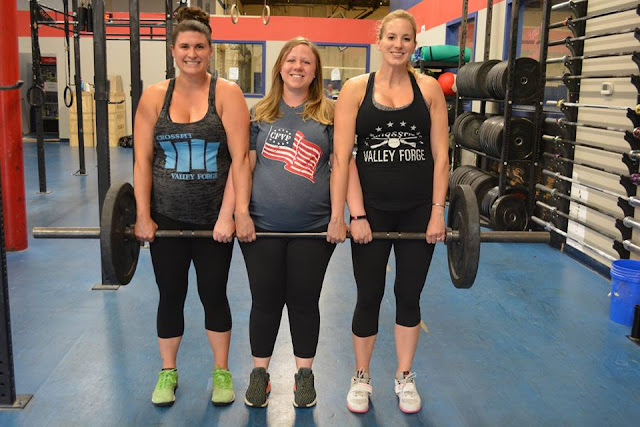 And a brutal workout, as per usual for Friday! 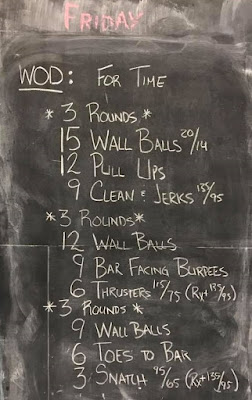 My left knee has been bothering me on and off lately (a ski jump injury from when I was young and dumb) so I'm backing off of squatting below parallel (wallballs & thrusters in this workout).  I cut the pull ups to 8 reps and did 75# for the clean & jerks.  I subbed bar facing burpees for squat thrust step overs and did the thrusters at 65#.  And for the last round I did 4 toes to bar and Rxed the snatch weight!  The workout was long.  It was a 30 minute cap, but I only had 1 round left so I just decided to finish and was done in 31:44. 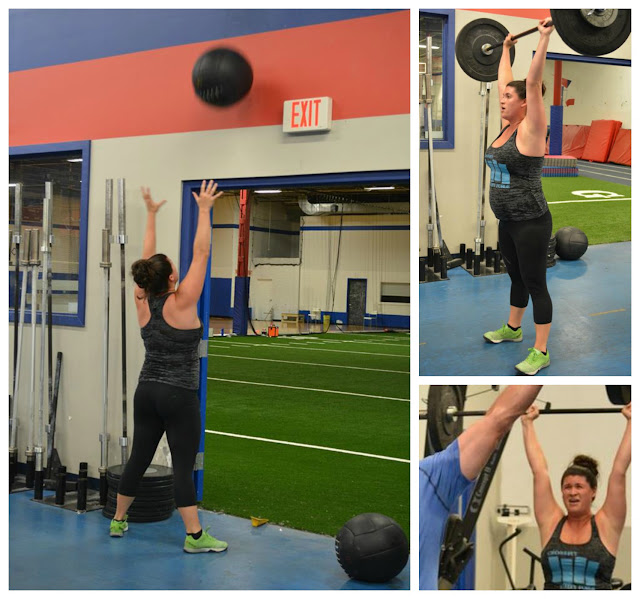 I was really hot when it was over and after some recovery time I felt totally normal.  But around lunch I started feeling a serious pain right below my belly.  I tried going to the bathroom and stretching out and I would get some relief, but I was really uncomfortable the whole rest of the day.  My evening was scheduled full of errands and cleaning, so I waddled through the grocery store and took lots of breaks while trying to tidy up the house.  It was definitely a new experience for me and I started to wonder if my comfortable second trimester feeling was coming to an abrupt end.

The next morning I woke up and felt so much better!  I wasn't sure if I overdid it at the gym or what but I'm going to go ahead and say I probably shouldn't have done those toes to bars.  I believe I was feeling some round ligament pain:


What does it feel like? Round ligament pain is typically felt as achy, crampy or sharp sensations on one or both sides of the lower abdomen. You'll probably notice occasional round ligament pain more when you change positions suddenly or get up from sitting or lying down, or when you cough, sneeze or laugh. It may be brief or last for several hours (yet another mystery of pregnancy).

What causes it?  Your uterus is supported by thick bands of ligaments that run from the groin up the side of the abdomen. As your uterus grows, the supporting ligaments stretch and thin out to accommodate the increasing weight – which pulls on the ligaments and causes sharp pains and/or dull aches in the lower abdomen. Other causes of a sore lower tummy include increased blood flow (you've pumped up the volume to nurture your baby) and the buildup of your uterine lining.

It seems pretty normal according to the internet, but hopefully I don't have any more that lasts for several hours.

Saturday night we headed into the city for "my last night out" so I could get my dance on before I can't anymore.  We hit a few bars, I got down with my bad self, and somehow stayed awake until 3 am!  We stayed over at Michelle and Alex's apartment, so I think I got about 5.5 hours of sleep.  Sunday we grabbed brunch and then headed over to Camden to tailgate for the Dead and Company show at the BB&T.  I let it all hang out (like a good hippie would) in a bikini top and shorts and carried Dave in a game of beer water pong.  The weather was absolutely perfect and we went in early enough to grab a decent spot.  I had to beg the staff to make me a virgin frozen drink.  It was a serious feat, like nobody had any clue why I would want to purchase a drink without alcohol in it.  But I finally got a mango pina colada and it was everything.  The music was amazing and the people watching was unreal.  I've been to plenty of concerts and the Folk Festival, but I don't think I've ever seen such a huge free for all of wasted people, which was also magnified by the fact that I was sober.  The concert didn't end till 11:30 and by then I was pooped.  We got out of Camden surprisingly quick, ate a snack at Michelle and Alex's, and got home around 12:45.  Monday morning was rough! 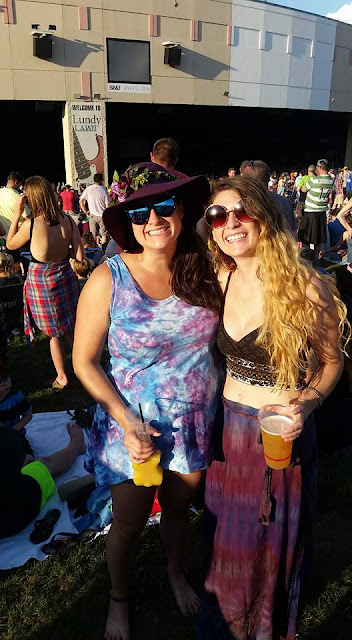 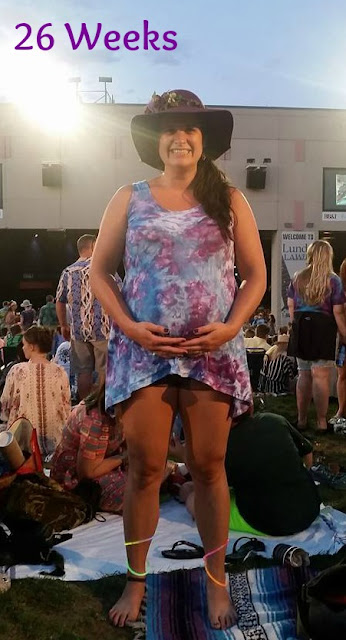 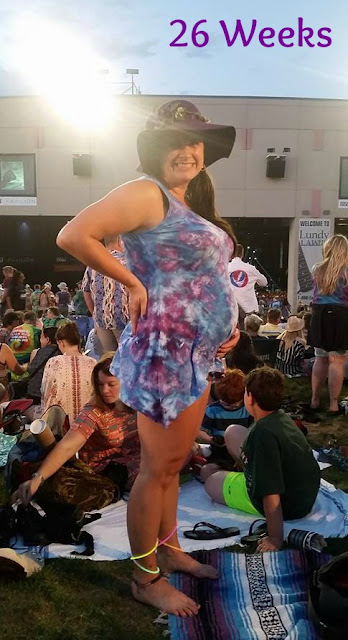 This morning I hit CF and the warm up was feeling a little more difficult than usual.  My belly is starting to feel heavy and I'm just feeling less comfortable in general.  The strength was snatch again and it's turning into my favorite thing at the gym.  I thought maybe I wouldn't be able to go as high, but I hit 95# easily again.  There's no way 105# is going to my max when I come back!  The WOD was a mix of snatches (at 60-70% of what you hit, so I went with 65# which was almost 70%) and bar over burpees for 20 minutes, with some built in rest.  The snatches were super easy and I was able to do them all connected, touch and go.  The squat thrusts felt kind of crappy in my belly so I'm wondering if I should start doing them elevated on the parallette bars or on the side of a box.

I think this week was a turning point for my body.  My stomach is starting to feel heavy and I'm feeling less comfortable overall.  I only have 3 months left, the third trimester is almost here, so I guess it makes sense... I just need to remember to be gentle with my body.  I'll be enjoying an a trip to the chiropractor followed by a pedicure tonight :)  On the flip side, the kicks and movement have really ramped up this week, which is the coolest thing ever.  I still can't believe there's a 14 inch baby inside of me!