I knew a workout with double unders (click the links to see some short demo videos of the movements) was coming up in the Open and I was dreading it!  I can barely do them and when I do it's one at a time with some singles in between which takes forever.  I've connected two in a row a handful of times, but recently I feel like I'm actually getting worse at them.  And when I miss, I whip myself with my speed rope and it sucks!  They are extremely frustrating and the more frustrated I get, the worse they get.

Enter 15.3 last Friday.  The workout was announced: a 14 minute AMRAP of 7 muscle ups, 50 wallballs, and 100 dubs.  Muscle ups are an advanced CrossFit movement and I do not have them.  So I was saved by the muscle ups!  I had no choice but to scale which was 50 wallballs and 200 single unders.  And I got a 10 lbs medicine ball instead of the 14.

This workout was a test of endurance.  The wallballs made me winded and my thighs started burning.  Jumping rope was my rest period, but my calves were feeling the burn too.  I got through the first two rounds and had a few minutes left.  I broke most of my wallballs into sets of 5-7, but I really wanted to get through the last round so I pushed hard and did them in sets of 10.  I finished the wallballs and whipped through 78 singles before time was called and I dropped to the ground to catch my breath.

In 14 minutes I did 150 wallballs and 478 single unders!  And then I forgot the enter my score into the website before the deadline.  Big time womp :( 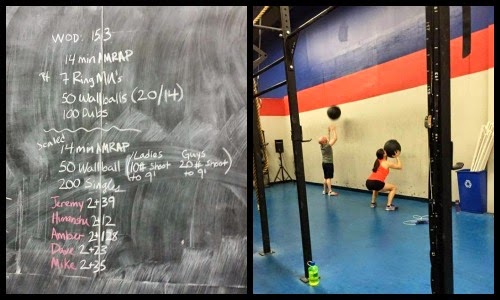 I skipped CrossFit in the beginning of this week to give my back a break (and to enjoy St. Paddy's Day).  I went for my first run (in possibly 9 months) with Dave on Monday night to shake my legs out for a 5K we're running next weekend.  It was my first run on the trail near our house!  When Dave mentioned that he wanted to run the 5K under a 10 min/mi pace I laughed out loud and told him I'd meet him at the finish line.  I did not think that was a realistic goal for me, but then we ran 2 miles and I felt great.  We did the first mile in 10:08 and the second in 9:17!  Considering I ran my fastest 5K at a 9:15 pace, I was kind of shocked that I was able to run that fast without any training.  I guess all those grueling long WODs have been keeping me in shape after all.  Apparently running uses some different muscles in my legs though because they were sore for days!  I'm going to try to get another run or two in to prep for the race, but we will be facing our last Open workout the night before, so I'm not sure how great my legs will feel that morning.  Either way it will be fun.  The race is the Phillies Charity 5K and our cool down lap will be around the warning track of Citizens Bank Park! 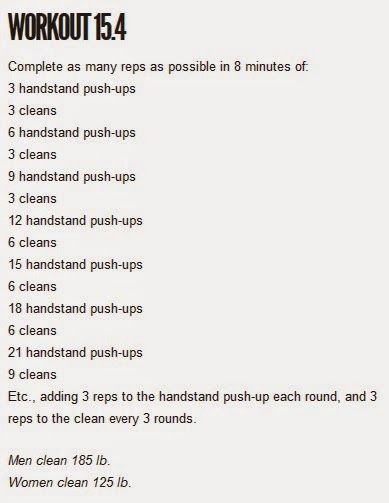 When I saw 125 lbs cleans (which is the PR I hit in 15.1a) and handstand push-ups (which I do not usually Rx since I put extra mats under my head), I immediately thought ok I'm scaling, until I got to the gym and my coach was like nope!  My coaches have encouraged everyone to push themselves and see how much they can grow in the Open.  And the way it is scored, any Rx workout, even if you only get 1 rep, beats a scaled workout.  So I loaded up my bar to warm up and see if I could actually lift that weight today.  Max cleans are so mental for me, I lift the bar up where it's basically high enough to catch it... and then I lose confidence and bail.  After a quick freak out, I got it together and cleaned 125 and knew I had to Rx it. 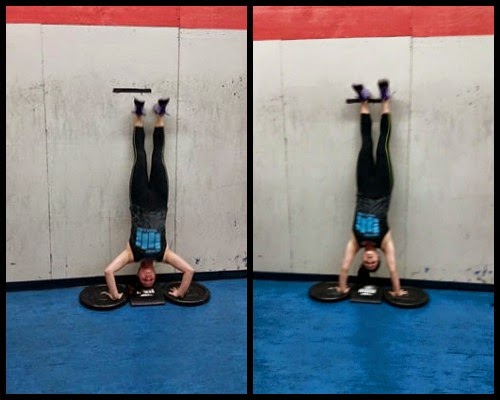 The first 3 handstand push-ups were no problem.  When I came over to my barbell, I was definitely playing mental games.  I bailed a few times and then boom, the first clean went up no problem.  The next two were fine!  I went over to do the 6 HSPU and they were definitely harder.  I did them one or two at a time and before I knew it I was headed back for more cleans.  I wasn't even sure I'd make it this far!  I mixed in a few more head case moments, but I got all 3 cleans and was headed back to the wall!  I busted out 5 messy, but legit HSPU before the 8 minutes were up for 20 reps total.  I guess it's safe to say that I can Rx HSPU and 125 lbs is not my one rep max for cleans!  So pumped!!!!


Thanks for the video Amanda!

When I signed up for the Open, I didn't really understand the point.  I know I'm not headed to Regionals.  I knew I wasn't going to have all the movements in the workouts (I'm looking at you muscle ups).  I thought, what's the big deal anyway?  I signed up because my coach told me to, it was only $20, and everybody was doing it.  But now, I get it!  After each Open workout, I felt like I left it all out there.  I pushed myself, felt the support of my teammates and coaches, and accomplished things I didn't think I was capable of!

And now, I was supposed to be headed to yoga to get my zen on, but I decided to hibernate since we have a few inches of snow and it's still coming.  Happy first day of spring indeed!