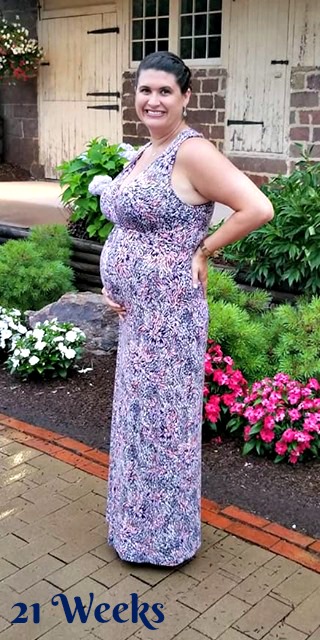 Thank goodness it was a short week at work, because I was still dragging from our weekend down the shore.  V must be teething or something because she woke up crying at 3:50 am on Wednesday, which is very unusual.  When my alarm went off at 5:10 for the gym, that was a big fat nope, so I skipped.  I think my days of uninterrupted sleep are over for a while.  I keep waking up and having these crappy dreams.  They aren't quite nightmares, but they are unsettling and I wake up feeling like I did something wrong. 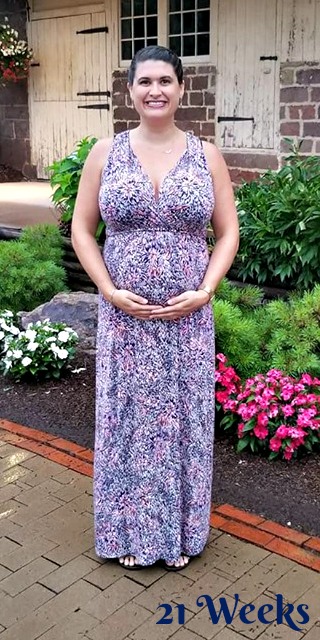 Vienna's big girl room is officially painted!  We got two paint samples but ended up picking Waterscape from Sherwin Williams and I love how it came out. 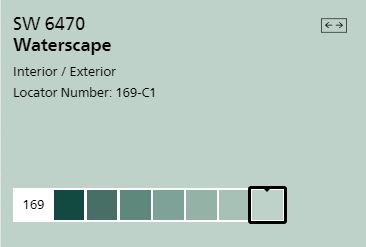 My dad came over on the 5th and helped Dave, they did a lot of prep work and then painted the ceiling and trim.  Dave did the primer on Saturday morning and then painted two coats of the color on Sunday.  He was a champ!    Vienna seems excited when we're hanging in the room and tell her it's going to be hers, but to be determined how she reacts when we actually move her in there. 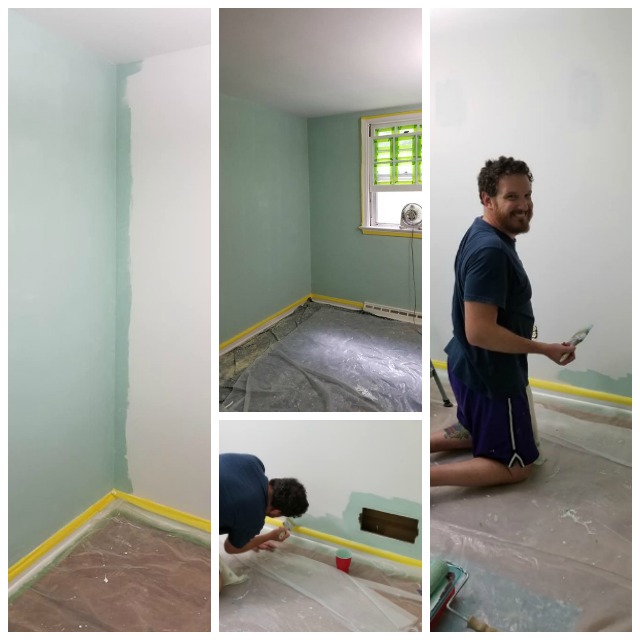 After helping Dave for the afternoon, my dad took V and Mela home with him, leaving Dave and I kid free for most of the weekend!  We took advantage of the opportunity and went out for a dinner date at Sage in Phoenixville.  Apparently we only go there when I'm pregnant, because the only other time we've gone was when I was 38 weeks!  But we knew the food was good last time and we had a gift card to use.  We split the falafel appetizer and then Dave got an ahi tuna special and I got a giant bowl of seafood pasta.  My dish included shrimp, scallops, salmon, and crab meat over linguine in a pink lobster sauce.  It was all delicious. 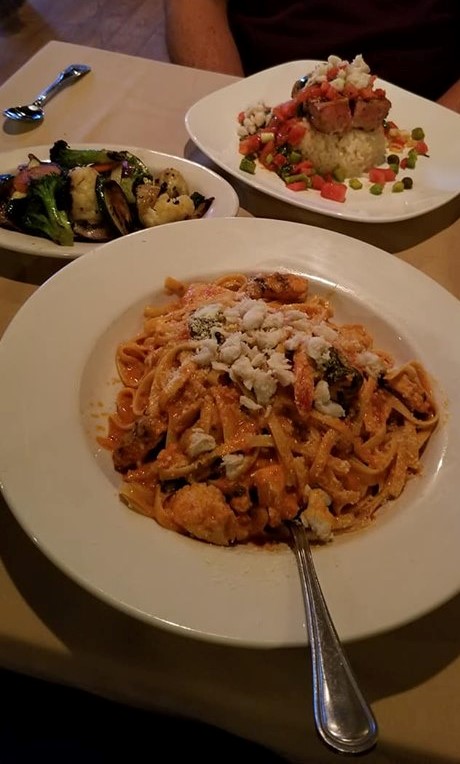 Saturday I slept in and then finally went to workout at the Y.  Since we've joined I've gone for Vienna's swim lessons and to enjoy the outdoor pool, but I hadn't actually used the gym yet.  CrossFit has been my priority, but I did not want to set an alarm and I figured I'd go sit by the pool for a little after my workout.  I hit a few sets of heavy back squats, ending with 130# for 6 reps.  And then I did the strength metcon that I would've done at CF. 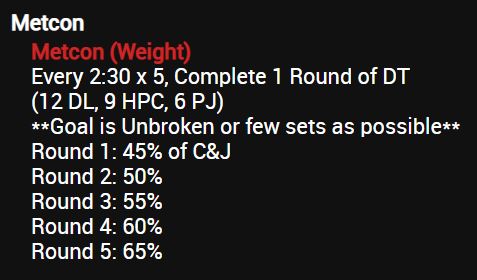 I did 45, 50, 55, 60, 65 as the weight for my sets.  I intended on going heavier, but those weights felt plenty heavy and using a thick men's bar smoked my grip.  I was able to do the first two rounds unbroken and then the last 3 I took a break between the deadlifts and the hang power cleans.  I ended my workout with some bicep curls.  The Y gym was fine, but after 6 years of CrossFit watching people do nonsense at the Y was... entertaining.  Sitting at the pool afterwards was perfect.

Saturday night we attended Dave's cousin's wedding in Elizabethtown.  The ceremony was outside and it was intense.  I believe it was almost 90 degrees, but the sun and humidity made it feel like almost 100.  The chairs were way too close together and we were jammed in shoulder to shoulder.  Midway through the ceremony I had a moment where I started to feel ill.  Thankfully the sun went behind some clouds and the moment passed, but I was real happy when it was finally over.  The  rest of the evening was in AC and it was lovely.  The dinner was yummy, the flowers were gorgeous, and the band was awesome!  We danced all night and had a blast.  The drive home wasn't terrible, except my pregnant bladder forced us to stop at a random gas station only 30 minutes into the drive. 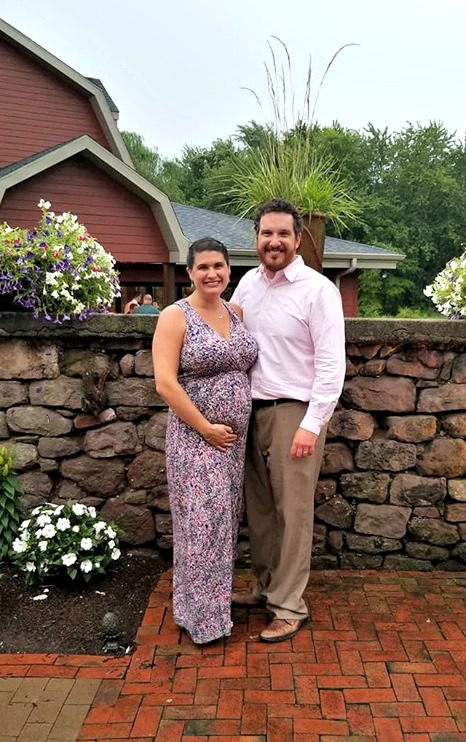 Sunday I got to sleep in again and spent most of the day catching up on some shows with some house tidying sprinkled in.  We started a "Whole6" so I made a sweet potato hash, bacon, and dippy eggs for breakfast and then Dave helped me put dinner in the crockpot.  We had beef, carrots, potatoes, and onion and it really hit the spot.  To be clear, I'm not trying to diet, I'm just trying to rein in my habits.  For example, we've been enjoying our coffee with tasty flavored creamer, it legit tastes like dessert.  But we really don't need to be drinking all that sugar.  That first sip of black coffee was a rude awakening!  I'm hoping that after the week is done, I'll be a little less addicted to sugar and some of the good habits will stick around. 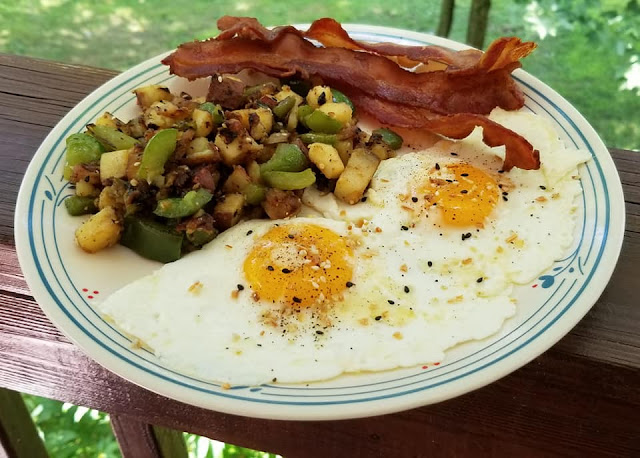 My self esteem has been taking a bit of a hit lately... I thought I'd be able to avoid gaining so much weight again, but the past few weeks the scale has been climbing.  I feel HUGE and I know I have a long way to go.  I'm trying not to dwell too much because I know pregnancy can be different for everyone and the fact that I lost 30 lbs in the week after delivery tells me that my body may just need to pack on the pounds when I'm growing a human.  But I'm hoping I can get things under control a little bit and I certainly don't want to find out that I have gestational diabetes.

Ah the joys of pregnancy!