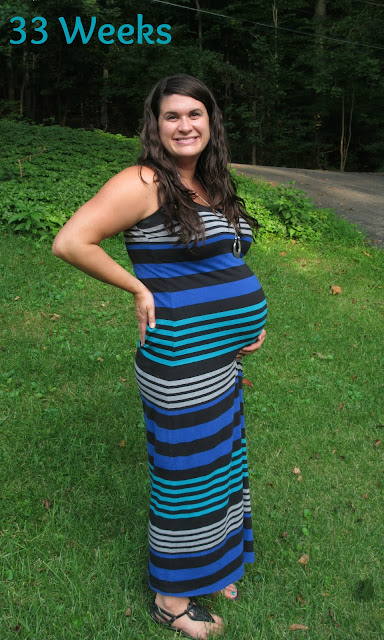 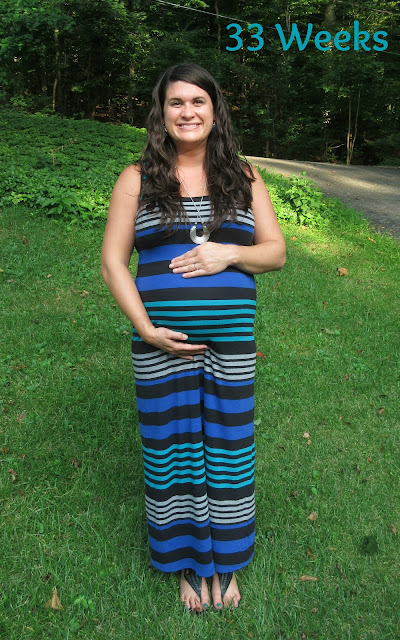 Friday's WOD was a long mix of many different movements including wall balls, pull ups, rowing, burpees, handstand push ups, and lunges.  I'm happy to report, I still have my pull ups!  I subbed incline push ups (on a racked barbell) for the HSPUs and it seemed like they were going to be really easy, but apparently I haven't been using those muscles much lately because I ended up being really sore through my chest. 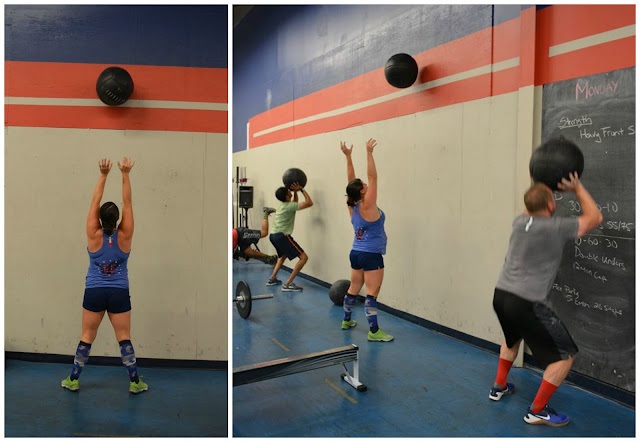 Friday night we went out in Phoenixville for both a little going away party for Shayna and Kyle and to celebrate our friend Jaclyn's birthday.  I failed to snap any pics, but it was a really fun night at a new brewery called Root Down.  I honestly felt like a champion hanging out at the bar after 11, 8 months pregnant and having gotten up for the gym at 5 am.  Jaclyn was fawning over my belly and told me I was a goddess.  It was just what I needed :)

Saturday Dave let me sleep in while he took the dog for a nice long walk.  When I woke up we headed to Duck Donuts!  They are so tasty. 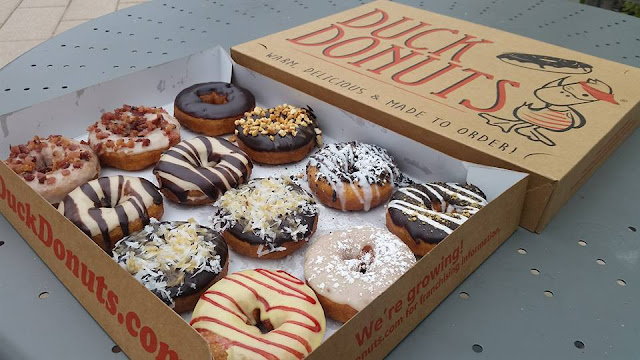 The rest of my day was consumed by cooking!  I spent 5 hours in the kitchen prepping 4 different recipes for the freezer.  I made Leftover Roast Chicken Soup with Roasted Vegetables, this Paleo Shepherd's Pie (with an added layer of cauliflower mash), Cheesy Chicken Tuscan Pasta (plus some zucchini, spinach, and mozzarella), and a super simple Chicken Cheddar Broccoli Rice Casserole.  I started with the more labor intensive tasks (prepping all the meat, chopping all the veggies, etc.) but within the first hour I was already feeling over it and actually started to feel ill.  I think that I was experiencing a sugar crash after only having donuts and coffee in my system, so I took a little break on the couch with some water and a string cheese and felt a lot better.  It was a long day of cooking, even with trying to stay off my feet using a stool at the counter and sitting at the kitchen table as much as possible.  Dave was downstairs continuing to organize the basement, but he came in clutch to do some dishes and chop most of the chicken just when I needed the help the most.  Each recipe made two 9"x13" pans of food (and 6 containers of soup) so I think Dave and I will get around 6 meals out of each one!  5 hours for 24 meals for 2 people... worth it! 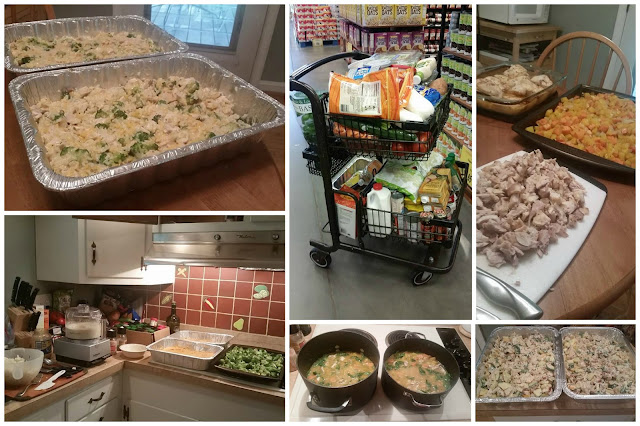 Sunday started with a short dog walk, followed by church.  Then I met up with Leah to spend the day together and run a bunch of errands.  We ran around KOP, enjoying each other's company, and got a lot done including basically robbing Motherhood Maternity.  A while ago I ordered a bunch of items online but they sent me someone else's order.  I got a full refund for my stuff and they told me they would send me a return label for the incorrect items.  I kept all the clothes in the mailing bag for months and then finally just decided that they were mine now!  I kept a few of the items but still had a really fancy dress and a bathing suit that I didn't care for or need, so I returned them and got $90 store credit!  The woman working at the store was amazing, she really made me feel great about myself and even volunteered to check out my items with two separate transactions so I could use both my coupons.  I purchased a bunch of pricey nursing items that I wouldn't have splurged on otherwise and after their sales, my coupons, and my store credit I spent $21 on $150 worth of merchandise!  Boom! 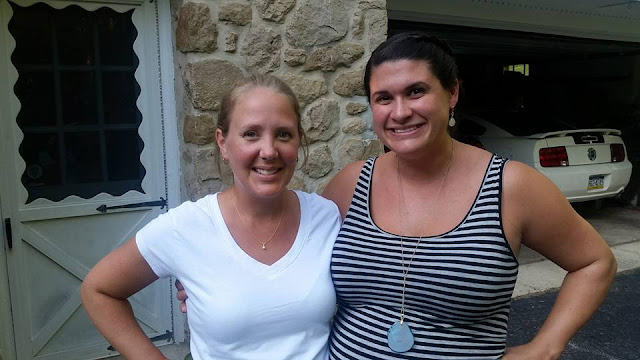 After doing all that cooking on Saturday, we woke up around 2:45 am on Monday to a huge flash of light and a barking dog!  A tree randomly fell and took out the power lines and all I could think was MY FOOD!  I was stressing all morning and kept waking up worrying about losing all the meals I worked so hard on.  When we got out of bed at 6 something, the tree removal team was out there but PECO was no where to be found.  Dave packed everything in coolers and took it to his parents' house for the day.  Our power was back on around 11 am.  The freezer food probably would've been fine without getting moved, but anything in the fridge would've definitely been ruined.  Everything turned out ok, but it wasn't exactly how we wanted to start the week.

Wednesday morning I dragged myself out of bed for CrossFit.  I was starving when I woke up but then I forgot my Clif Bar, so I kind of felt off throughout the workout.  We started with a 20 rep back squat at 50% of your max.  I went with 85# since my knee has been iffy on and off (it didn't hurt this morning, yay!) and it was so many reps.  It felt pretty heavy and was really unenjoyable (for everyone in the class based on the general complaining going on).  I felt a little something in my belly immediately afterwards and think I really should've broken up the reps.  The WOD was a mix of kettlebell swings and handstand push ups (I did more incline barbell push ups).  The kettlebell swings were a little iffy with my back, even though I know I was using good form and I used the 26# KB which is light for me, but not enough to make me want to stop.  The push ups were challenging again and I enjoyed that. 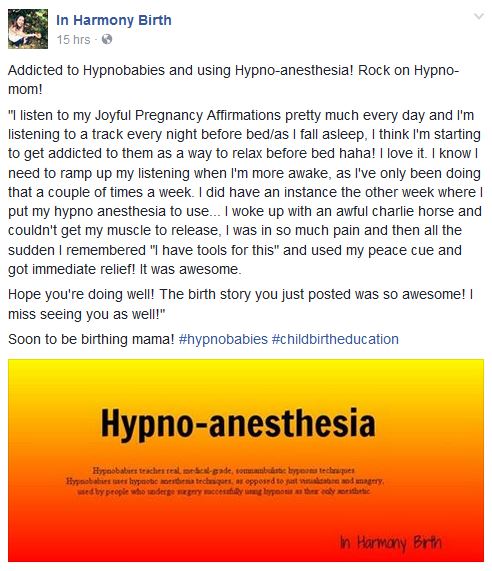 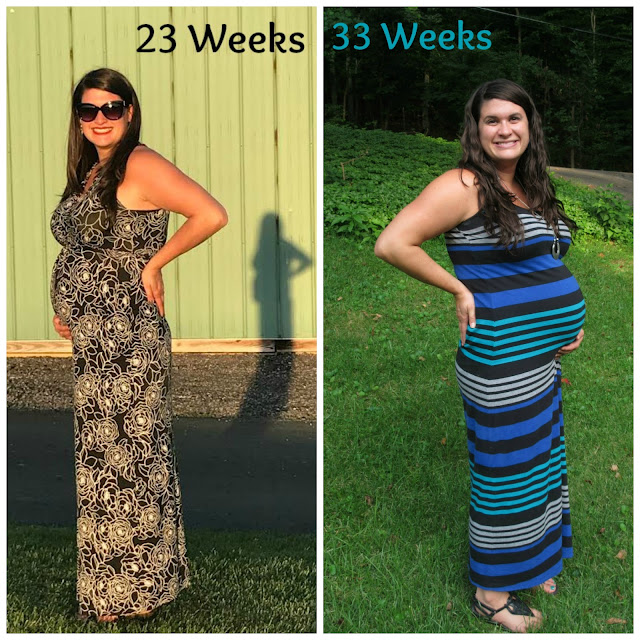