After jumping in the lake after our long day of travel (aka Part 1), we cleaned up and headed to dinner at the tiny restaurant across the street called Coco's.  The restaurant was a small open air hut and the staff didn't speak much English at all. 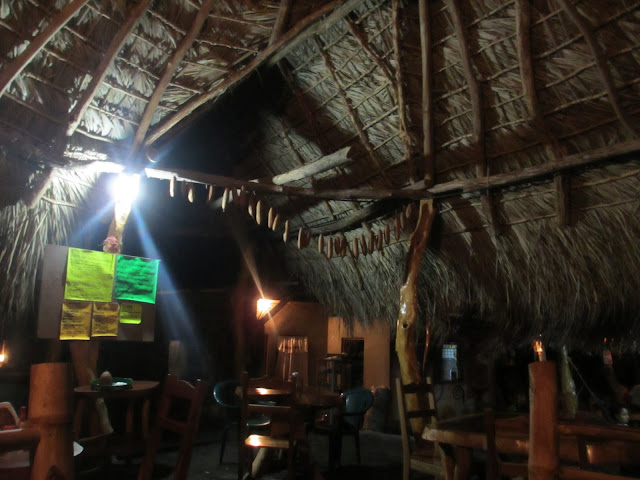 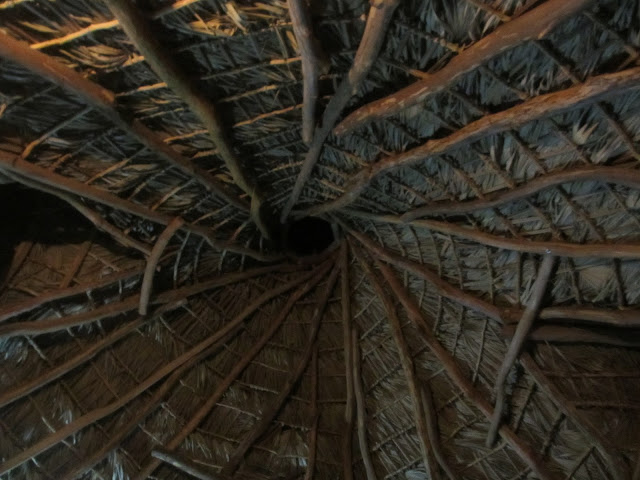 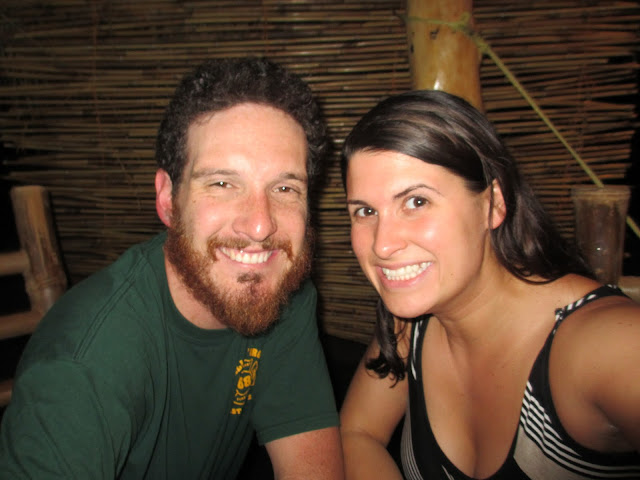 We both ordered fresh juice and some water, but as soon as the water was delivered I knew I should've ordered agua purificado aka bottled water.  I was so thirsty and Linda had mentioned that the water is ok to drink since it comes from a spring from the closer volcano.  I decided to live dangerously and drank the water without any repercussions!  For dinner, I knew I had to have the fish.  Our meal took a little while since everything was prepared from scratch and the fish was cooked over a wood fire.  I was caught off guard when the whole fish was plopped down in front of me, but it was so delicious that I quickly got the hang of getting all the meat off of the bones.  After dinner we were beyond exhausted so we turned in for the night. 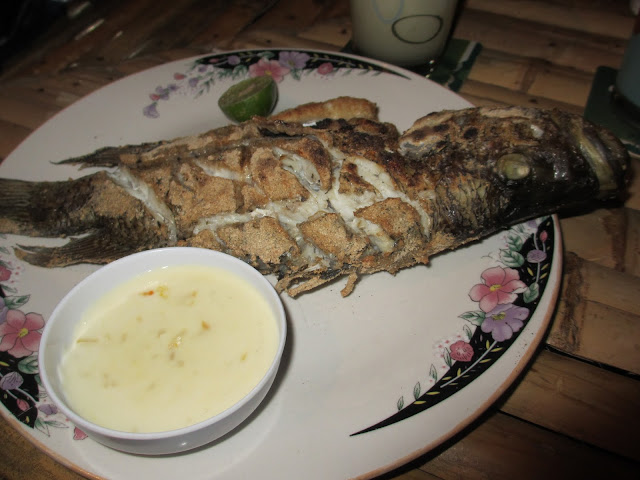 The next morning we woke up nice and early to some cars driving by, dogs barking, and other random hustle and bustle.  I headed outside and did some wandering through Linda's amazing garden full of beautiful flowers, coconut trees, bananas, herbs, and more.  Her gardener spent a lot of time there and he was super friendly.  And so were the pups that lived on the property! 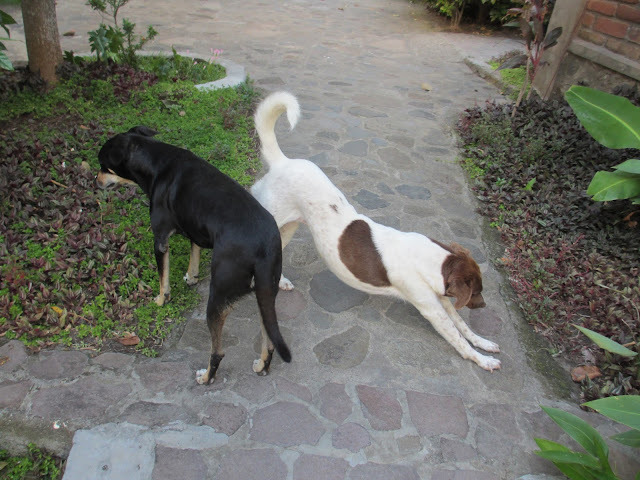 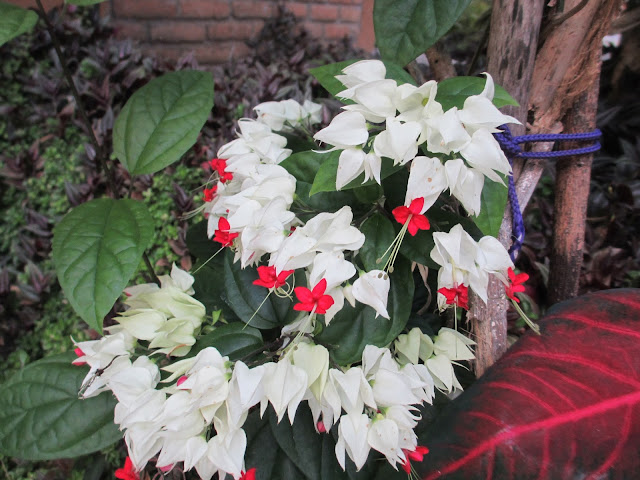 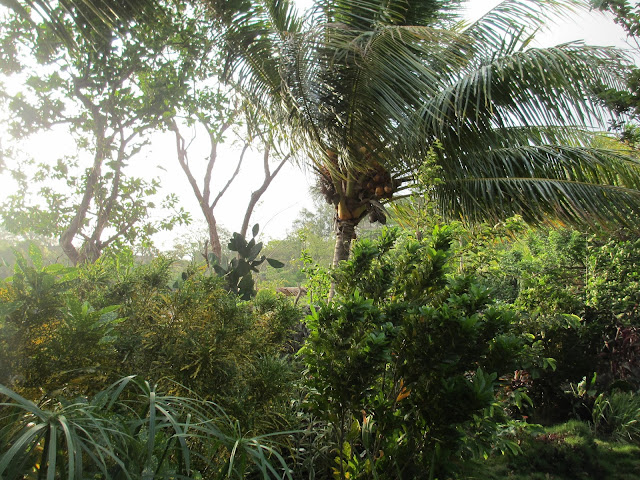 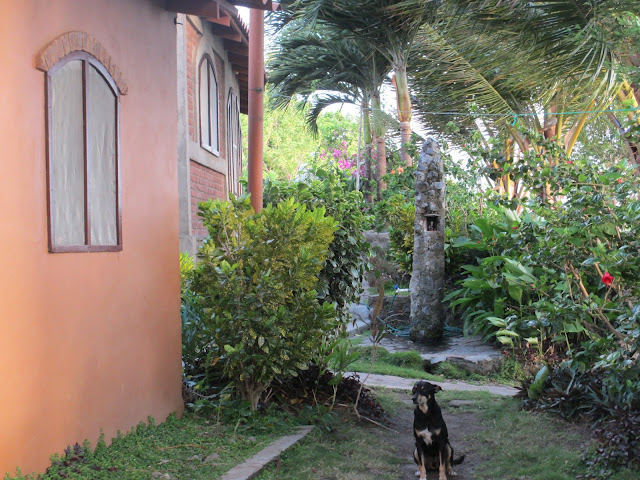 The sun rising over the lake was breathtaking! 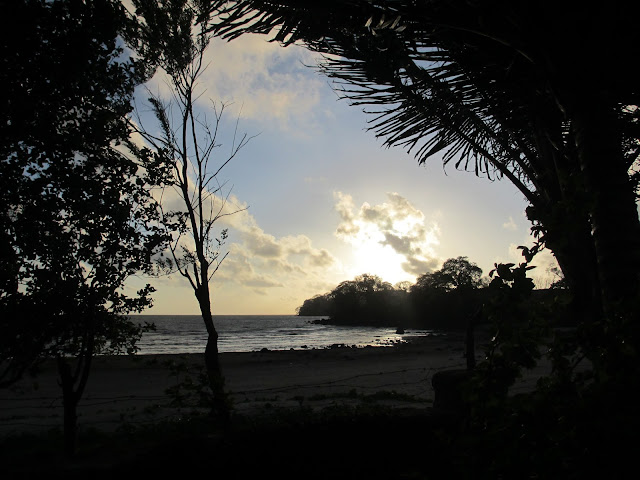 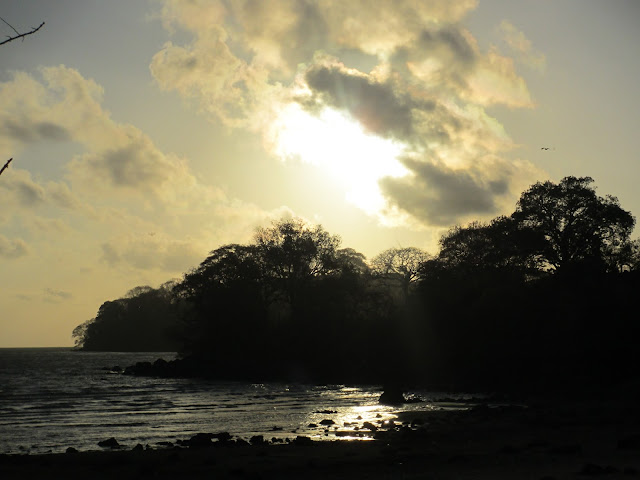 After a short walk on the beach, Dave and I decided to head out to breakfast.  Linda told us about a restaurant only a short walk up a hill as well as a convenience store on the way.  Dave and I wandered into the little shop looking for some ingredients for cocktails.  We found a bottle of cola and some Nicaraguan rum.  The woman checking us out kind of gave us a strange look and asked us if we were having a fiesta.  It didn't occur to us that we were buying booze quite early in the morning.  In fact it wasn't until we got to the restaurant, that we actually found out how early it was.  We had been up for a few hours at this point and we thought it was almost 10, but turns out it was only 7 am!  We put our phones away and I forgot a watch, so we were kind of just living on island time.


Breakfast came with a view.  It was pretty cloudy, so you could only see some of the big volcano, but it was still so magnificent. 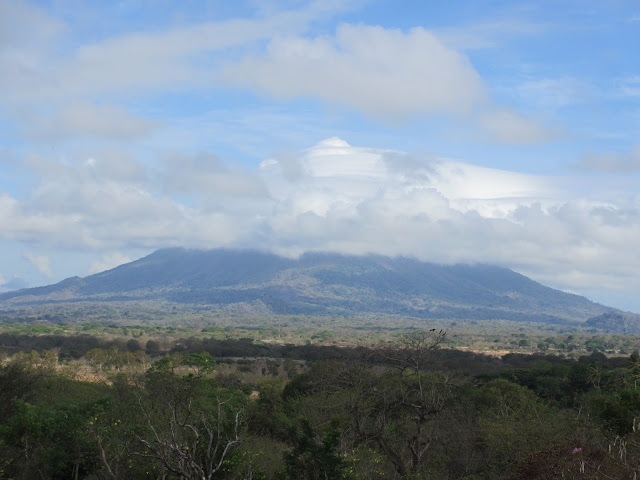 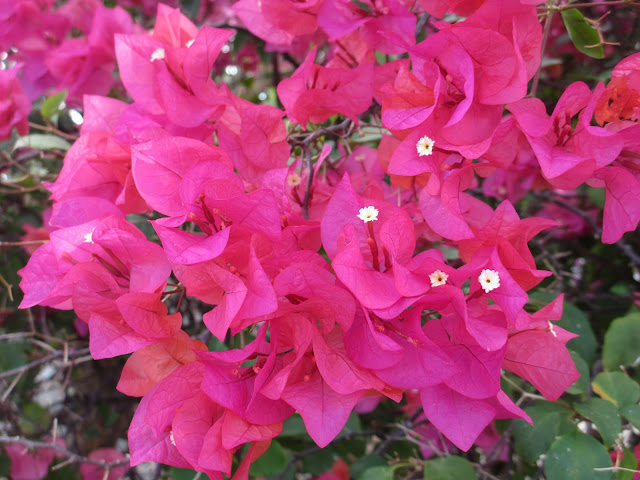 The place we ate at was called Hotel Santa Cruz, it was kind of a hostel, so we met a few people from different parts of the world that had been traveling Central America for months.  The food was tasty. 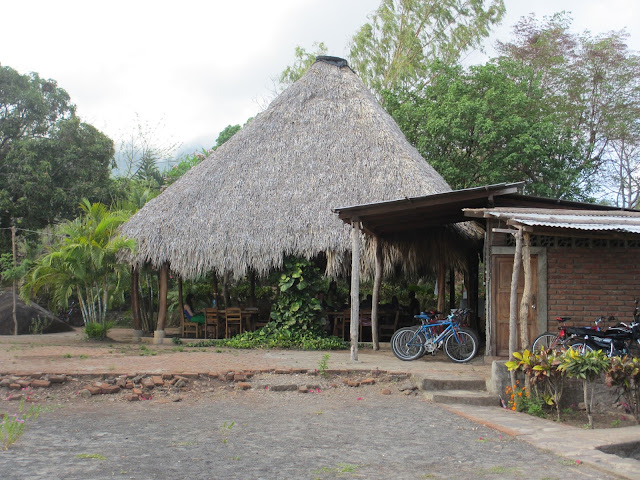 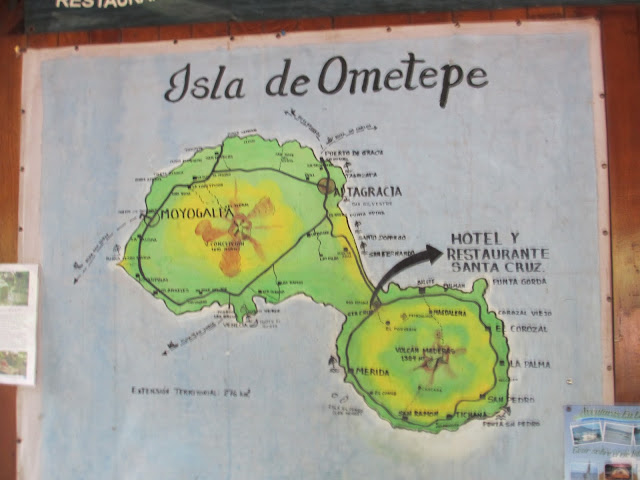 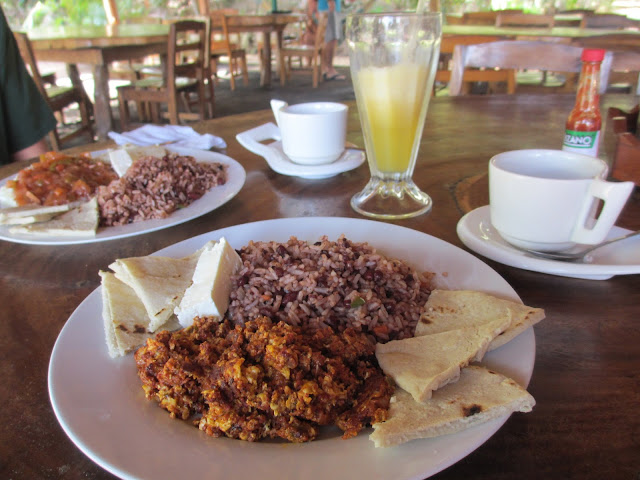 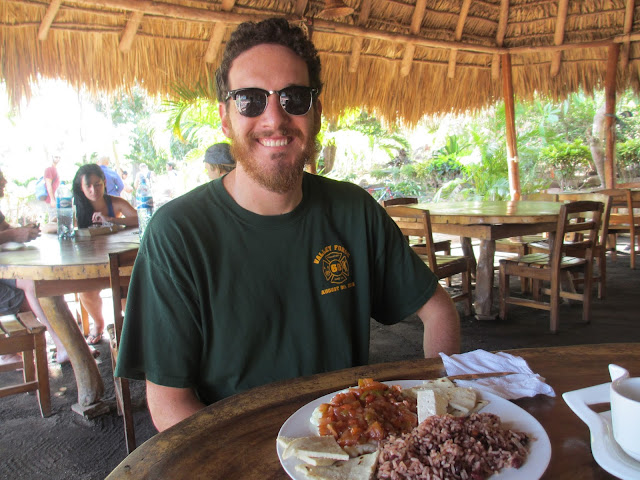 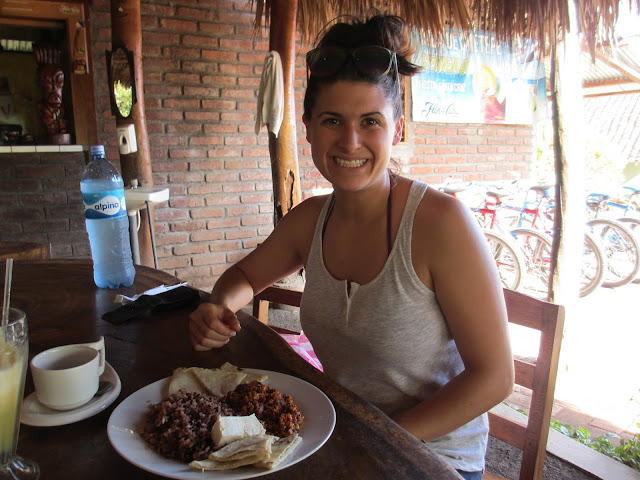 We originally planned on filling our trip with some activities, but with the 95 degree temps during the day, the exhaustion from traveling and the wedding, and finding out the shortest volcano hike was 6 hours, we decided to do more lounging than anything else.  After breakfast, we hung out on the beach. 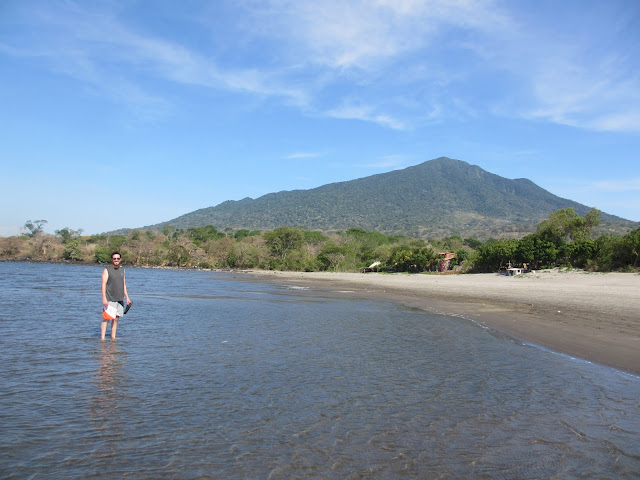 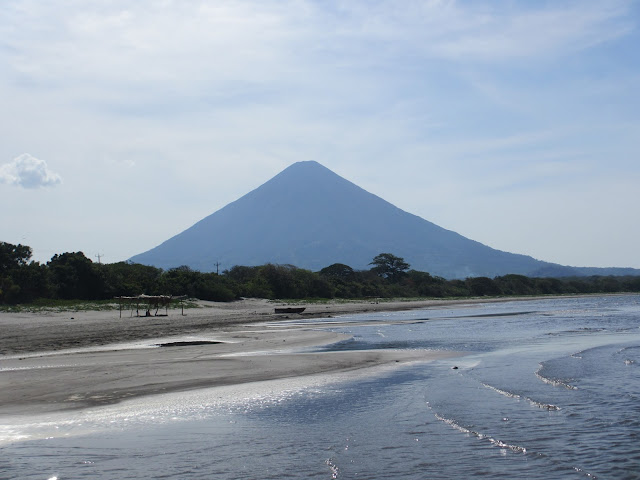 We checked out another hotel restaurant down the road for lunch.  It was so hot and I was feeling a little cranky sitting next to some young children that obviously needed to retreat to some AC and take a nap.  The food wasn't great and I found myself wishing we had just gone to Coco's again. 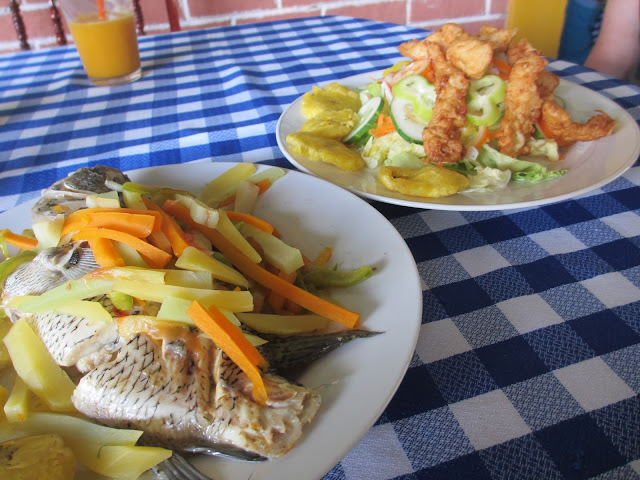 During the afternoon the temperatures became almost unbearable so we retired to the shade, lounging in the hammocks that hung in the garden and inside the casita.  I read Mockingjay in the first 48 hours of our vacation between the airplane, the ferry, and that first lazy day. 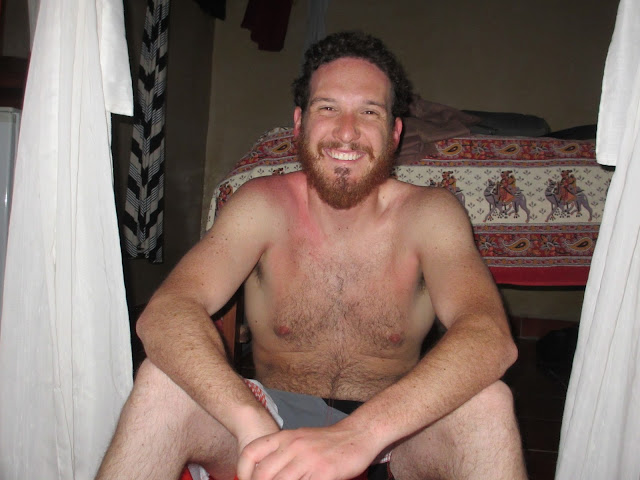 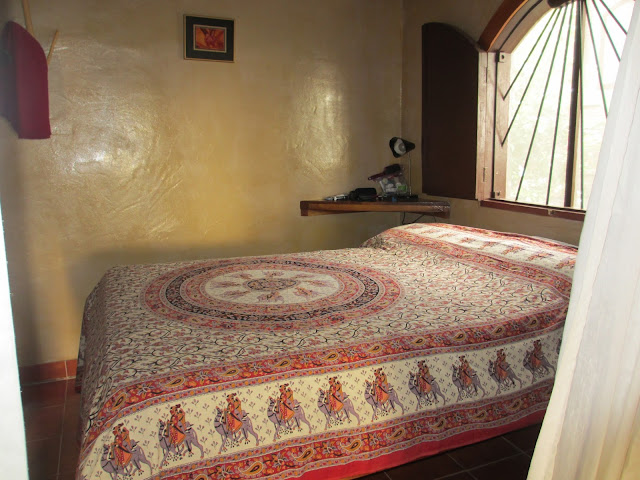 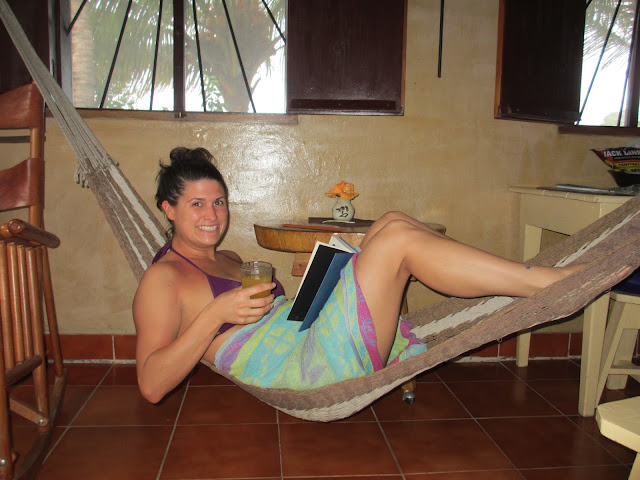 When the sun started to go down, the lake would cool down a little.  It still felt like bath water, but sunset was a perfect time to take a dip.  After more swimming, lounging, and cocktails, we headed to another restaurant right next door for tacos and some fun drinks.  Since we had been up since who knows what time (5 am or earlier?) and there wasn't much of a night scene anyway, we turned in pretty early again.