My goodness, there are so many things I have to update you guys and post about.  Our wedding anniversary was yesterday and Dave and I really celebrated in style.  I also owe you the next installment of our honeymoon recap (a whole year later... I know, I know)!  And my ode to Puddin' is in the works too.  But in the mean time, I have a special update for you guys!

I began to notice that my clothes were fitting better, but more than that, my energy level sky rocketed.  I honestly never thought I would feel this good without coffee and energy drinks.  As I said before, my energy levels were always so low, all I wanted to do was sit on the couch and sleep.  Not anymore.  I get up early, sometimes without the need for an alarm clock, and fall asleep at a decent time.  I am no longer sluggish during the day.  I also noticed that I had ZERO stomach issues.  ZERO!!

I was so happy for her when she got rid of her chronic fatigue, dealt with her stomach issues, and managed her hypothyroid symptoms with the Whole30!  And now I'm happy to share another update from her... 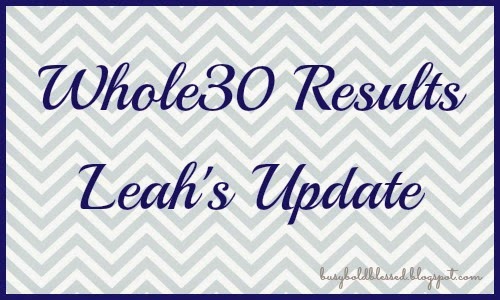 As I had mentioned earlier, my husband and I have been trying to conceive (TTC), but not really trying.  Well that was not the whole truth. After a year of marriage, we decided that it was time to start our family.  At the time, our living situation was NOT ideal, but we were both ready, so we began the process.  I have to say, this is for sure the super fun part!  Until it was a year later and we still were not pregnant.  I know that I was under a lot of stress living in a house with 7 other adults who had their own idea of how to run a household.  It was too much for me to handle, and as they say, being stressed and TTC do NOT mix. When we finally moved out of that house and into our own, I felt the stress lift and knew that part of our lives was over.  We were serious about trying and after a few months of nothing, I was becoming increasingly frustrated and upset.

Voicing my concerns with Amber, she introduced me to this fabulous book called Taking Charge of Your Fertility.  Now, when I say this book was a life-changer, I am not kidding.  The book is such an easy read, totally relatable, with amazing information about the female reproductive system and much more.  As I read, all I kept thinking was, "Why has no one taught me this before!! When we were getting the birds and the bees talk, I would have much rather learned about THIS than the standard, this is a penis, this is a vagina..." The book teaches you everything you need to know about your cycle, how to chart, and basically how to become in-tune to your own body (whether you're trying to conceive or trying to prevent pregnancy).

I began to take my temp every morning before getting out of bed and charting the other fertility signs (that I will leave that up to you, dear reader, to investigate) and I suddenly became aware of how long my cycles are, when I ovulate (believe it or not ladies, not everyone ovulates 14 days after their cycle) and many other things.  Weird things, like my sense of smell became more sensitive around my ovulation times...

Anyway, after a few months of getting to know myself, I began the Whole30.  I just felt like my body needed a reset.  And with that said...

A HUGE congratulations to Leah and her husband Pete!  I knew I had read online that the Whole30 has helped couples conceive, but I never would've guessed that it would be the final piece of the puzzle for my dear friends.  I am so happy for them!