My Heart is Full

I'm am completely overwhelmed with emotion.  My brother winning homecoming king really meant so much to him and our family and now this wonderful article has been written about him.  Everytime I read it, it brings me to tears.  It's been blowing up on facebook and I just had to share this with everyone.

And then Tom’s name was announced. He was king, which is how the students have viewed him for years, a member of high school royalty. He bounded off the platform in dark suit and sneakers, smiling and clapping. Somewhere in the stands, Diana and Mike Nowak drowned in a puddle of tears.

The king joined his queen. A white sash with “Homecoming King 2012” was placed on him. While the student body went wild, the new king stood posture perfect and soaked it all in.

Behind him on the platform, two fellow members of the court, football players Jarrett Reinhard and Anthony Williams, were celebrating Tom’s coronation as though they’d just won the state championship.

“What those students did for Tom shows the level of selflessness they have,” Mike Nowak said. “At this point, they probably don’t really appreciate what an honor they gave to him. Maybe when they get older and have children of their own they’ll truly understand.” 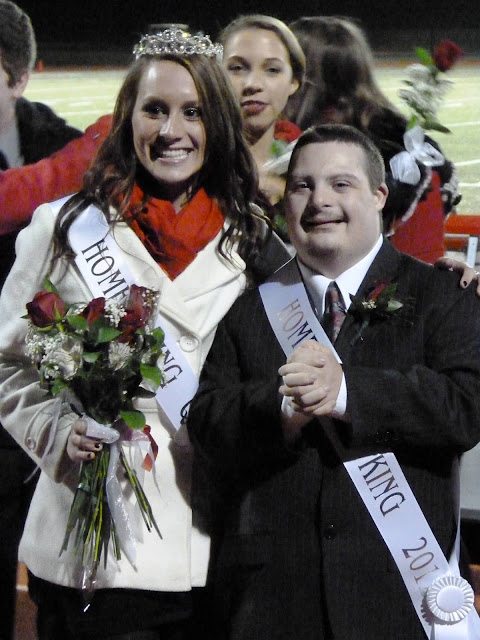 Please check out the entire article and watch the video!  And I dare you not to get choked up.