The Next Big Thing

Since I hate running in the heat so much and haven't had anything to train for, lately my runs have been pretty much nonexistent.  Although I've been getting my fitness fix with some hot yoga and my first ever zumba class (which was SO much fun and also kicked my butt!), I really want to get back into running as the temps start to fall.

So I signed up for a race!  I'll be running the Victory for Voices 10K on November 3rd and Dave is running it with me!  Apparently he got bit by the running bug because he just went out and bought himself a nice new pair of running shoes and he already started training!

- The race also includes a 5K distance so I'm trying to suck in some more friends to race with us!
I'm excited about the 10K distance because it's definitely a challenge, but it won't be as demanding on my body as the double digit mileage was while training for my half.  I really have no interest in hobbling around in pain after my runs, so yay for 6.2 miles!  Since I really haven't been running, I decided to put together a training plan that starts next week. 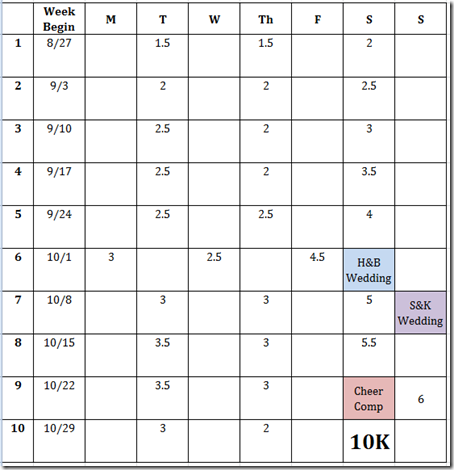 So many of the training plans on the internet call for 4 days of running per week, but while training for my half I learned that that's a bit too much for me, so I will be running 3 days a week.  I also learned that the exact distances didn't matter for my midweek runs and really just ran whatever I felt like at the time somewhere between 3 and 5 miles.  I knew I would be fine as long as I got my long run in on the weekend.  In addition, I also followed the days loosely because of my ever-changing, mega busy schedule.  I would just run on days I could fit it in, but always took at least one rest day between runs.  So basically I've created this schedule as a loose plan and a motivation tool.

So ready to get back into it and start crossing off those runs!

Do you have anything you're training for?  Anybody local interested in joining us?!
Posted by Amber at 10:34 PM