This was a great running week!  Tuesday I went to the group run, there's usually two pacing groups and I started out with the fast group.  I knew I wouldn't be able to keep up with them the entire time, but I figured I'd go as far as I could and then drop down and go join the slower group.  I stuck with them for the first two miles, but the pace kept getting faster and faster and so finally just when I thought I was going to be running alone, one of the other guys dropped back with me. 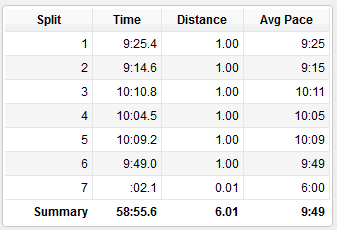 This was a great run.  Even after slowing down, we kept a great pace!

Then Thursday I tried out something new, I did walk/run intervals.

The goal was to run fast (well faster than my usual pace) during the running portions and then recover while I was walking.  I didn't go very far, but it was pretty tough.  Even with walk breaks (and lots of them) my pace was faster than usual.

I want to run faster in general... which means I have to run faster.  I can't sustain a 9:18 pace for an entire run (yet) but I think intervals are a great way to push my pace!  And yay for burning some extra calories!

Saturday was 8 miles and it was pretty uneventful.  The pace was slower than I generally cared for, but it made the miles easy and enjoyable. 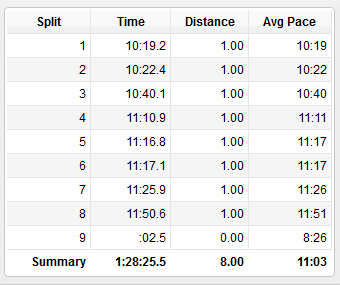 Anyway, my runs were great this week, but additional fitness was kind of a flop.  I fit in some BTN arm exercise and did some ab work one day, but I haven't really been feeling inspired.  I would like to tone up for bsuit season and I know I have to shake up my routine to get the results I'm looking for!

Running 9 miles this weekend, 10 next weekend, and then the Broad Street Run!  6 weeks until my half... holy moly!  I still can't believe I'm really doing this!

Do you ever find yourself in a fitness rut?  What's your favorite way to mix up your workouts?
Posted by Amber at 9:11 PM