Say It Ain't So

So I think I'm injured.  Womp!  About two weeks ago, I started having some pain in my hip.  At first I though it was only some muscle soreness, but then it hurt at lot and I figured it was probably time to actually go spend some money on shoes.  I ran twice last week in my new shoes, the first time with no pain and then I felt a little pain at the end of my second run, which was the 5 miler.  Then I didn't run for the rest of the week because I was sick but I did feel some hip pain on Saturday night after our day in Philly.  Tuesday night I ran 2 miles and I started out with a little pain in my hip, but then it went away once I warmed up and I felt perfectly fine that night and the next morning.  But halfway through my workday on Wednesday, my hip started to seriously hurt, like I was limping around work.  I was so upset.  I decided to skip my group run (which was cancelled anyway due to snow) and head to the chiropractor.  There I received some massage, an extended stretching session, and an adjustment.  Now it's two days later and my hip is still in some pain.

As of right now my plan is to take two weeks off from running and then see how I feel.  I'm so frustrated!  I thought I could get away with running in the shoes I already had for the first month of my training, I wasn't going that far, I was only running three times a week.  I guess I learned my lesson, proper running shoes are mega important.  I'm not really sure what my injury is exactly.  The pain is concentrated on the outside of my right leg where my thigh meets my tush, so from my internet reseach I believe it could be one of two things:

Hip Bursitis
Hip bursitis is a common problem that causes pain over the outside of the upper thigh. A bursa is a fluid filled sac that allows smooth motion between two uneven surfaces. For example, in the hip, a bursa rests between the bony prominence over the outside of the hip (the greater trochanter) and the firm tendon that passed over this bone. When the bursal sac becomes inflamed, each time the tendon has to move over the bone, pain results.
(source)

IT Band Syndrome
Iliotibial band syndrome (ITBS) occurs when there is irritation to this band of fibrous tissue. The irritation usually occurs over the outside of the knee joint, at the lateral epicondyle--the end of the femur (thigh) bone. The iliotibial band crosses bone and muscle at this point; between these structures is a bursa which should facilitate a smooth gliding motion. However, when inflamed, the iliotibial band does not glide easily, and pain associated with movement is the result.
(source)

Either way right now I believe the magical formula is some good old RICE - rest, ice, compression, and elevation.  I'm considering buying a foam roller too, I've heard great things about them and they're cheap! 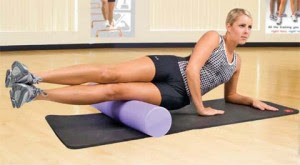 
I guess if the pain is still there in two weeks, I'll be headed to the doctor!

Have you ever had a hip injury?  Any suggestions?  Do you foam roll?
Posted by Amber at 5:22 PM