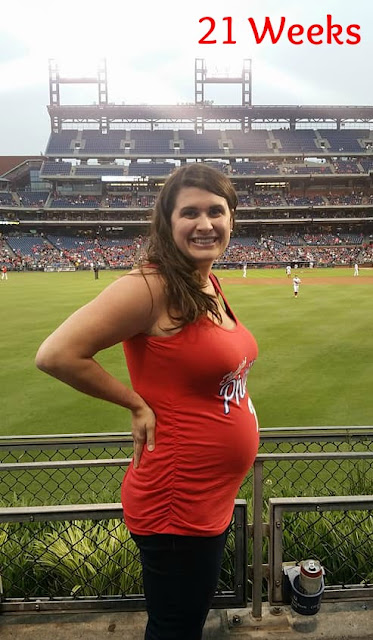 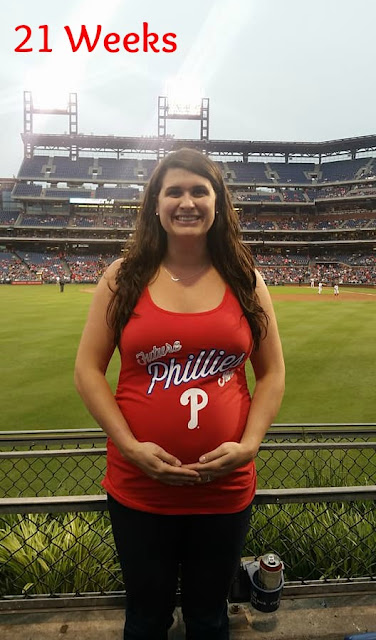 DAVE FELT THE BABY KICK!  We were laying in bed and I told him the baby was having a party and so he put his hand on my belly.  I said I wasn't sure if he would be able to feel anything yet, but who knows.  So he waited and waited... and the baby wouldn't move, like a watched pot won't boil.  And then finally the baby kicked and he felt it!  Such a cool moment :)

This week was very food focused.  I got it in my head that I wanted Thanksgiving dinner and I needed to have it!  So I hit the store and made a lazy version with rotisserie chicken and ate it for lunch all week. 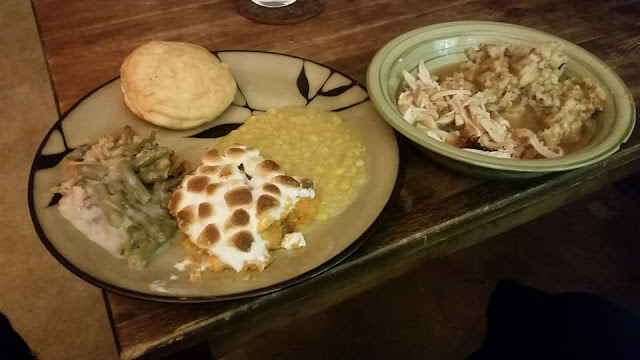 I went out for sushi to celebrate Leah's birthday and had some really awesome cooked rolls that almost made me forget that everyone else at the table was eating raw tuna.  I got a spicy shrimp roll, an eel avocado roll, and a roll with crab and octopus!  I don't think I had ever had octopus in a sushi roll and it was really good. 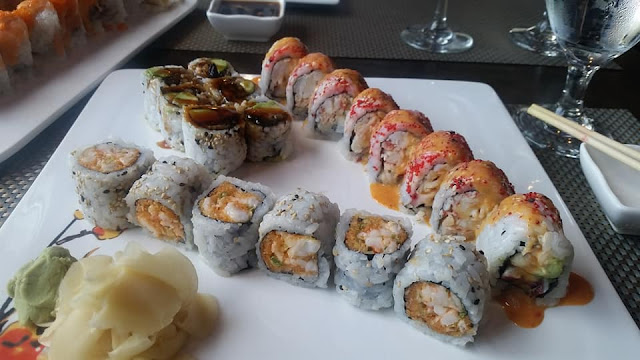 Then Friday we went out to the White Dog Cafe in Wayne to celebrate our 3rd wedding anniversary.  It's a farm to table restaurant with a seasonally changing menu that has been on my list to try for a while.  We started with happy hour at the bar and enjoyed some parmesan truffle fries and some really creamy mac & cheese.  Dave ordered a bottle of wine and next thing I know the bartender was pouring a glass for me.  I took a few sips and then Dave and I just traded glasses when he was done his.  I can honestly say wine is pretty take it or leave it for me.  I was way more upset about passing up the burrata cheese special everyone around us was enjoying. 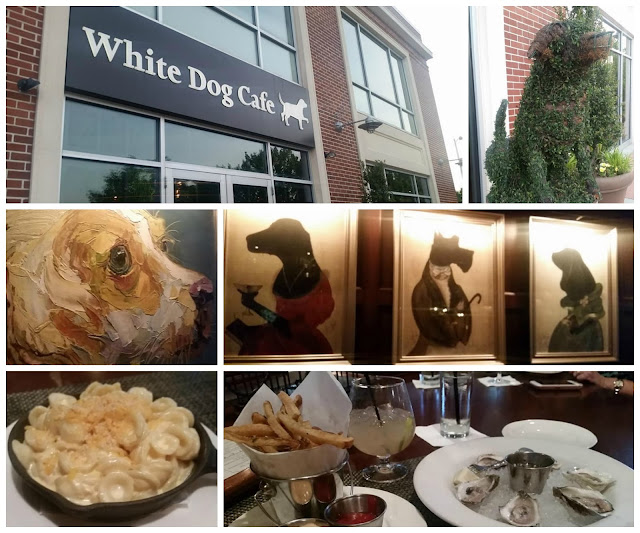 For dinner Dave got a lamb bolognese dish and I went with the pork tenderloin and both were delicious.  We didn't save any room for dessert, but they brought us out a super cute dish with a scoop of ice cream.  It was a lovely dinner and a wonderful anniversary celebration. 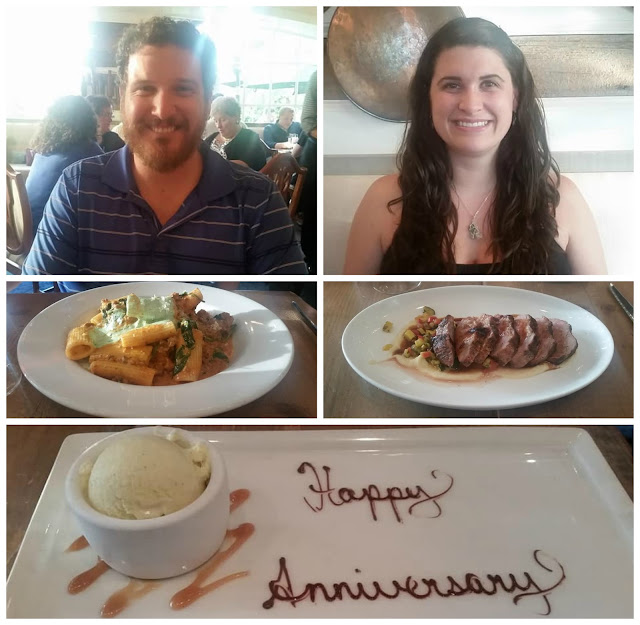 Saturday we went out to Red Lobster for a belated Mother's Day celebration.  I felt slightly less bad binging on the cheddar biscuits since I'm pregnant lol.  And the Ultimate Feast was everything! 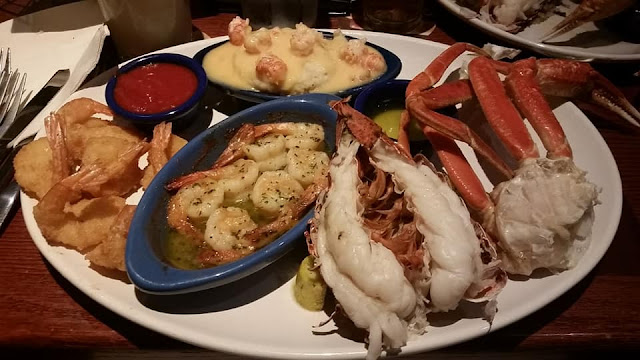 For dessert I made a super easy cheesecake topped with whipped cream, cherry pie filling, and chocolate chips and it came out great. 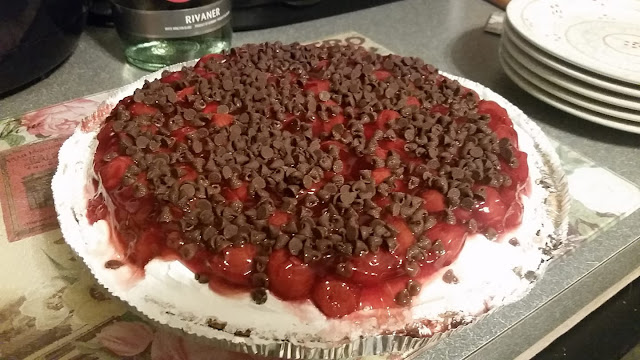 I guess I'm paying the price for all that eating because I am feeling pretty huge.  A friend from church made a comment that I'm going to be one of those women that doesn't even look pregnant from the back.  And I was like well all 20+ lbs seem to be hanging out up front lol.  My fingers are swollen and I think it's almost time to stop wearing my rings (before they get stuck and it's a crisis haha).  I was thinking I would just get a cheap band but then I found a deal I couldn't pass up.  I found this 1/4 carat diamond ring (retail value $135) for $31 and thought why the heck not?!  It's so different from my wedding rings, so it will be fun to have something different, and I can wear it on another finger when I'm not so swollen anymore. 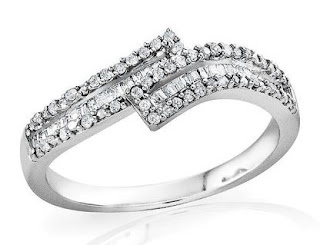 Other than eating like a pig, I also did some nesting.  Dave finally got most of his stuff out of the nursery closet and I spent some time on my hands and knees scrubbing it out.  Then I stuck most of the baby stuff in the closet, so we could figure out the furniture layout and start moving things around.  I can't wait to get it all set up once we pick out a crib!

This week we also toured a couple of daycares and met a woman who does childcare out of her house.  We have 2 more tours scheduled for the next week, but I think we will be finished after that.  One of the daycares we went to already had no availability for January 2018, so I'm feeling pretty antsy about getting this settled sooner rather than later.  It's such a big decision.

We had another session of our birth class and I'm still really enjoying it.  My desire to have a natural birth has been fully confirmed and I'm even starting to really buy into the hypnosis.  I need to practice and listen to my tracks more, but I'm not super worried about it since we have so much time.  I'm also desperately trying to get Dave on board with hiring our instructor as our doula.  He thinks it's an unnecessary expense, but I think it will be a game changer.  He was also super against me birthing without an epidural at first and now he's fully on board, so we'll see.


Mommas out there, did you use a doula?  Tell me about your experience!