First of all, I just want to thank everyone for all the really nice sentiments regarding my last post!  I hesitated to write about the topic, because I didn't want it to sound like I'm fishing for compliments, but it's a definite factor in how I'm feeling right now and I always try to keep the blog honest.  I really appreciate everyone who reached out <3

Now let's check out the bump! 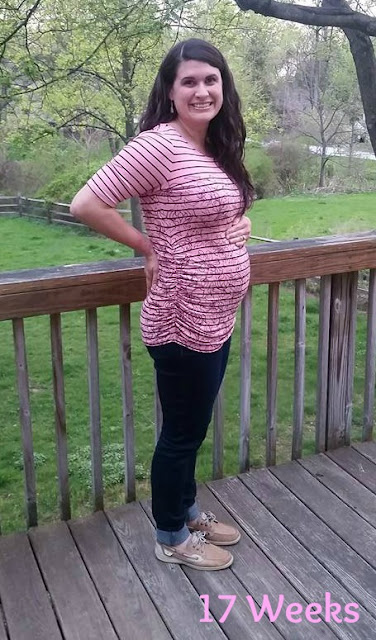 I feel like I "popped" this week and I finally made the leap to start dressing to show off the bump instead of just hiding it with big flowy shirts.  I wasn't fooling anybody haha! 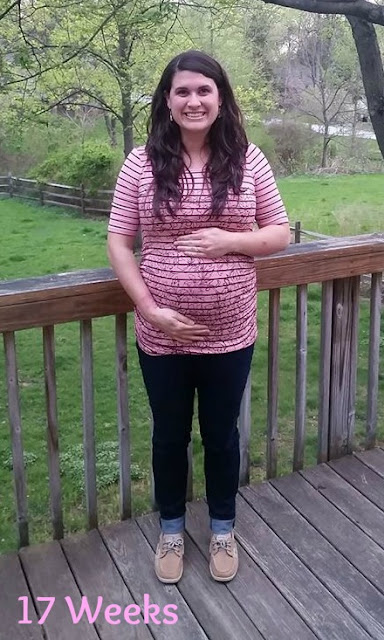 In other news, we started talking about baby names.  I've been thinking about girl names for a while since I "have more pull" for our baby girl (since if we were having a boy we were locked in with David Richard #5, try again next time).  I want something unique.  I don't want 3 other people in her class having the same name.  If it's in the top 50 on Nameberry, it's gone. But at the same time I don't want anything too different, nothing my child has to spell or explain to every single teacher.  Been there done that, anybody who went to school with me knew my catch phrase spelled with a "w" pronounced like a "v".

I recently revealed my long list of names to Dave and at first... he was not impressed.  But he gave it a few days thought and I threw in a few more choices, so now we have a few names in the running.  We have decided to keep the name a secret until she is born.  I've heard a lot of feedback from friends who received rude comments when they told their name to people ahead of time, so they advised us to keep it to ourselves.  And I don't have many secrets to keep these days, so I think it will be fun!

I had somehow avoided buying anything brand new for baby girl, but I finally got sucked into a Carter's sale!  A friend posted it on FB and I was like, I really don't need to be shopping but I couldn't resist.  I got this set for $6.60, originally priced $22 (who pays that?) and I got it in the 12M size since I figure we'll probably have too much when she's born anyway. 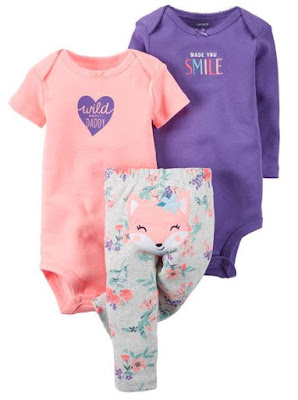 I originally thought the shirt said "wild like Daddy" but it
actually says "wild about Daddy."  Cute but just not as good lol.

And in the process of commenting on said FB post, my good friend Heather's sister-in-law offered me a bunch of totes full of baby clothes all the way to 2T!  I also recently received 2 boxes of baby clothes from Shayna's sister.  And on top of that, a friend from college, that I haven't seen in over 10 years, reached out and sent me a nursing bra and some other odds and ends.  Other friends have cleaned out their basements and sent me home with some clutch items too, and Baby Midgley has already received tons of cute new clothes.  The generosity has been unreal!

Regarding the gym, I've officially dropped burpees and I'm doing squat thrusts instead to keep my belly off the ground.  I also think running and jumping may be done, it just feels uncomfortable in my uterus during and after.  My friend suggested a support belt, but I'm not sure if it will eliminate the issue or if I should just rein it in.  It's not like I'll be super upset about not running haha.  I also hit a bunch of golf balls on Sunday and now I'm super sore in my right hip flexor and abs!  I went in with really low expectations but I was actually crushing the ball.

And finally, POISON IVY SUCKS.  Aside from the fact that I avoided getting a ton of it on my face (thank the sweet Lord above), this is definitely the worst bout of poison ivy I've ever had.  I'm guessing it's because my immune system is busy doing other things, but it is horrible.  I am going crazy! 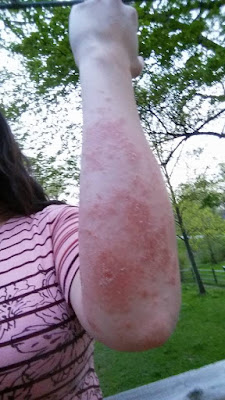