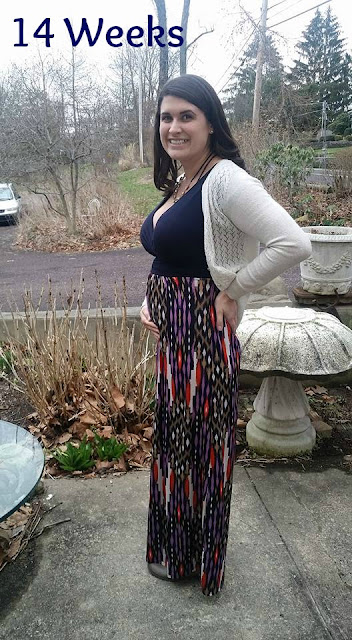 There's definitely something there, but I'm still trying to wear mostly flowy tops because I feel like it just looks like I have beer gut. 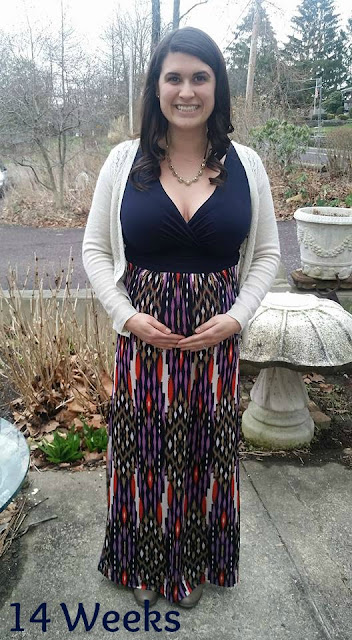 But I did finally embrace maternity pants.  I tried on a pair of maternity leggings that a friend gave me and it was life changing!  After that I finally washed all the pants I got off a facebook yard sale group and a pair of pants I splurged on when Gap was having a 35% off sale finally arrived in the mail.  So much more comfortable!  I really need to buy new bras soon, my boobs are huge.

Our biggest thing this week was the gender reveal.  They called me with the genetic testing results last Monday and asked if I wanted to know the gender and I asked them to mail us the results.  When I hung up, I immediately regretted it.  I wanted to KNOW!  The results came on Wednesday and it took all the self control I had not to rip open the envelope.  I took it to Wegmans and ordered our cake.

On Sunday we had our immediately family over for dinner and then it was time to slice! 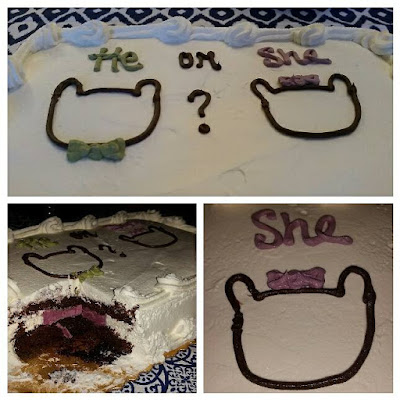 I still can't believe basically ALL of my friends guessed that it was a girl.  Apparently I had some kind of vibe going on haha.  I'm so excited, to be honest I really wanted a little lady!  We decided the cake looked like it had been decorated by a child, but on the bright side it was delicious.

Other updates for the week:

Sleep & Energy
I'm waking up multiple times every night but usually can get back to sleep pretty easily.  I typically get up to pee at least once.  I thought I was feeling more energy starting the second trimester, but I keep falling asleep on the couch every night and I'm still feeling pretty beat after lunch.  Hopefully an energy surge is still to come.

Food
I'm still the queen of takeout... I keep trying to meal plan and everything just sounds awful.  I'm also finding that I may need to start eating less than I'm used to, but more often.  I've been feeling uncomfortably full after eating a normal sized meal, so I think I'm already losing some space down there.  But I'm also super hungry, so I think I need to switch to more of a grazing style of eating throughout the day.  I WANT ALL THE AHI TUNA :(

Workouts
I've been pretty inconsistent in the gym for the past few weeks, between the snow storm, Butler going downhill, and now a super busy week at work.  Oh well.  I need to get back to a set schedule (story of my life...) because any time I get there I feel like a rockstar just for participating.  I attempted some handstand push ups last Friday and they felt super weird in my abs, so those were the first thing to go.  I was also very aware of my belly during my burpees, so I may be switching to squat thrusts sooner than later.  Otherwise everything still feels good!

Shower & Registry
My shower has officially been booked and my registry is pretty complete as well.  I didn't want my shower to be a surprise because I did not want to show up to it all sweaty and frumpy, which is how I anticipate spending most of my summer lol.  I'm also super hard to surprise since I'm such a planner so getting me for my bridal shower was enough!  It's going to be mid June, which is really early, but that's what I wanted, so I'm not huge and struggling trying to set everything up and do lots of laundry.  I want to have the nursery all ready to go well ahead of time, so I can spend the end of my pregnancy relaxing, cleaning, and possibly making a few freezer meals.

Not sure if I'll update every week, but I plan on checking in once in a while.  Have a great weekend!