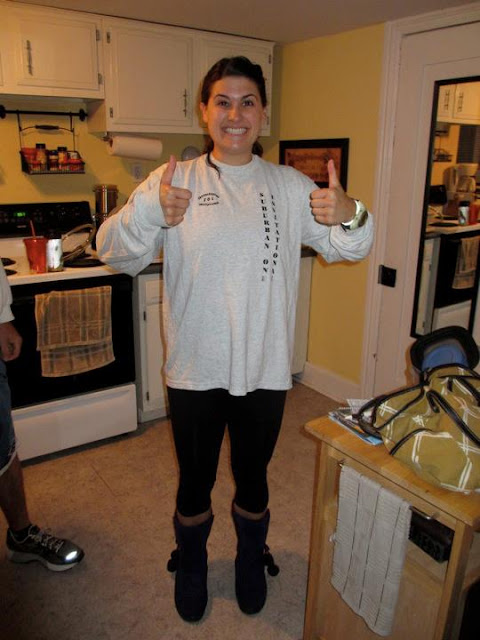 Do you see the crazy in my eyes???  My alarm went off at 4:45 am, but I was already up!  Shayna slept over in the guest room and TJ arrived promptly at 5:30 am.  Shayna prepped our breakfast (mini cinnamon raisin bagels, with a choice of almond or peanut butter, and bananas) while Dave packed the cooler full of post race goodies.  We left around 6, not sure what traffic on 76 would be like but made it down to North Philly in a record 25 minutes!  Dave dropped us off near the start and we were feeling lucky when we found some porta potties that hadn't been used at all yet!  What a race day gem!

Next we headed into the Central High School football stadium to kill some time singing random songs, meeting new people, and making jokes about the guy with the shortest shorts ever (and the odds of his member making an appearance at the race)!  We got there pretty early, but I was glad that we weren't dealing with the craziness of the crowds in the subway. 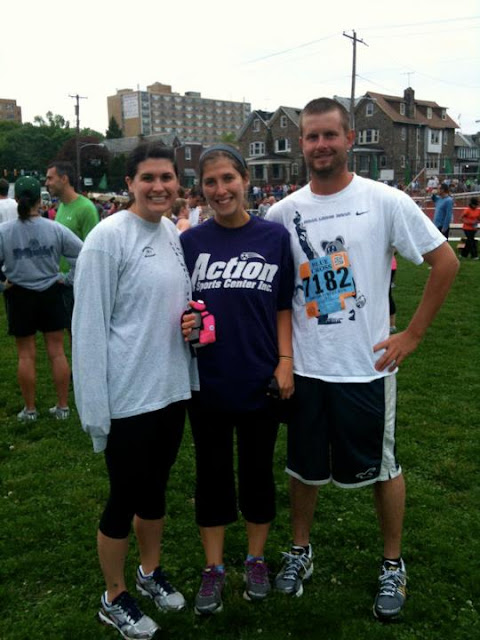 Next thing I knew we finished an awesome warm up and were headed to our corrals.  There were a ton of people but it was easy to find where we were supposed to be.  We even found Jenn! 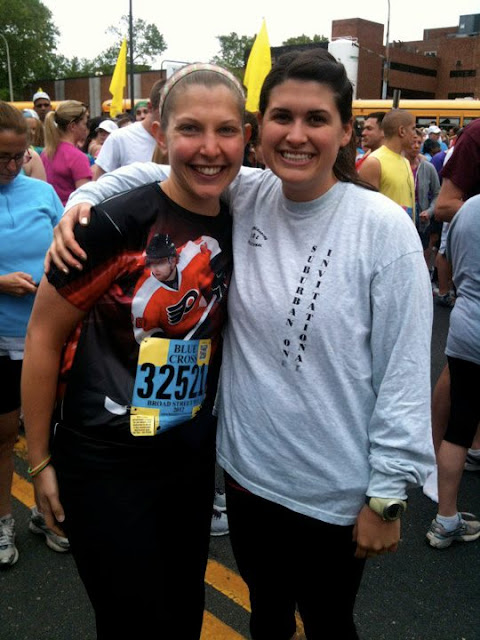 Since our corral was second from the back, we waited around 40 minutes just to get up to the start line. 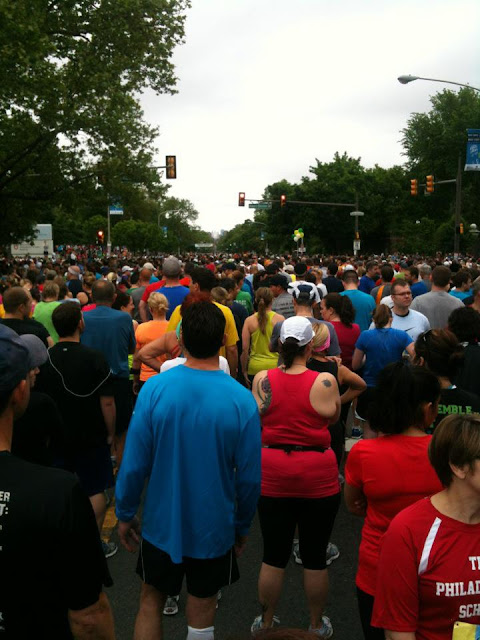 And then we were off!  The beginning was pretty intense, running with so many people was so exhilarating but also pretty crazy.  We spent the majority of the race weaving in and out and passing people.  The first few miles ticked by.  There were random spectators along the sides of the streets yelling for us.  And then we started passing bands, rappers, DJs, there were even some zumba dancers!

We knew Dave was waiting for us around city hall, but we weren't sure if the cross street was before or after so it was kind of fun looking ahead to each street to see if it was the one.  It really made the miles tick by.  Then the crowds really swelled when we got to city hall, and right as we came back onto Broad Street there was an awesome band and we saw Dave! 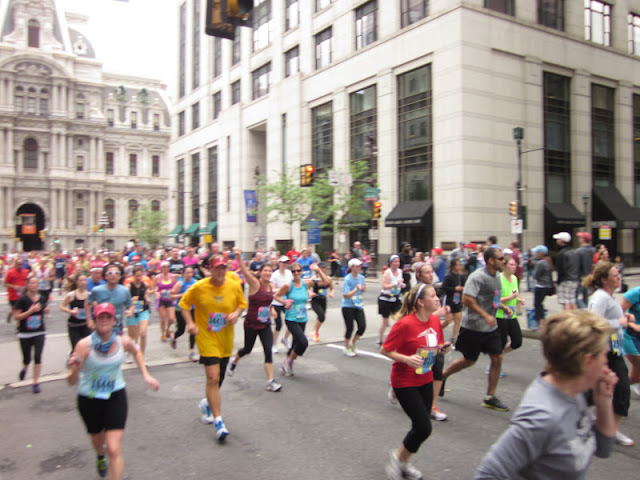 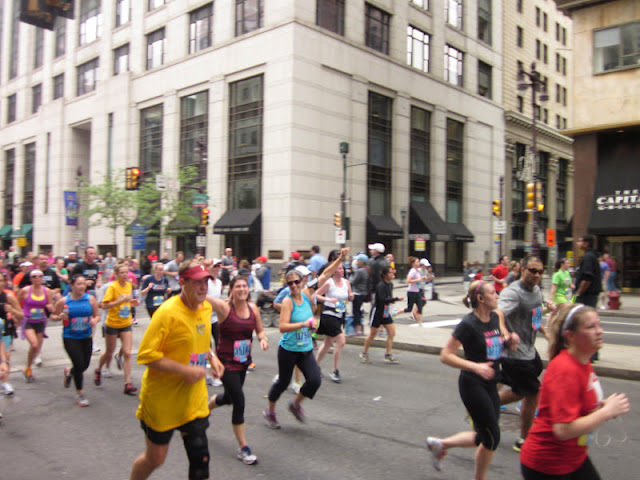 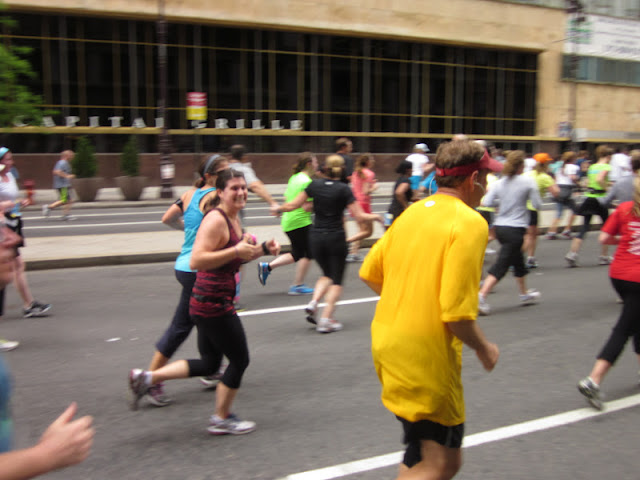 After city hall things kind of died down.  The crowd was scattered and my knees were really starting to ache.  Miles 7 and 8 were probably the hardest part.  I just kept saying we got this and almost there to encourage myself, Shayna, and everyone around us that could hear me.

Then all of the sudden I realized how close we were to the finish.  Shayna and I ran together until 8 or 8.5, but I started to lose her in the crowd around us so I told her I was going ahead.  And then I was off!  I started hauling it and passing a ton of people.  I just wanted to be done.  The course kept getting more and more narrow towards the end, which was annoying because it was hard to get through but I just kept pushing and pushing!

Next thing I know, it was over!  I did it!  I crossed the finish line and received my metal! 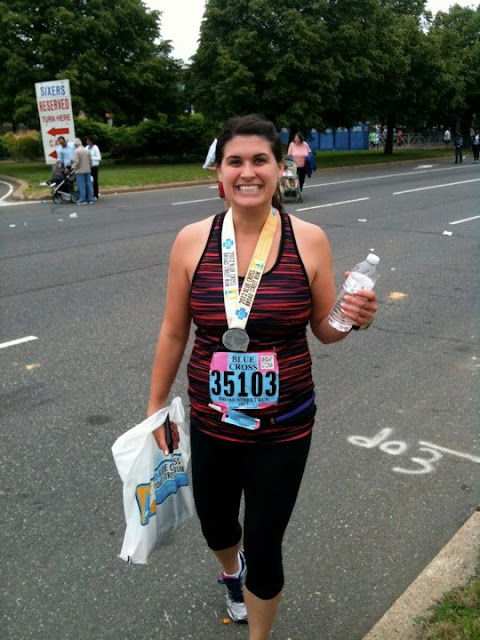 I didn't really have any specific goals for this race, I just wanted to finish.  But in the back of my mind I did want to beat the 1:47:42 I ran my 10 mile training run in.  I killed it. 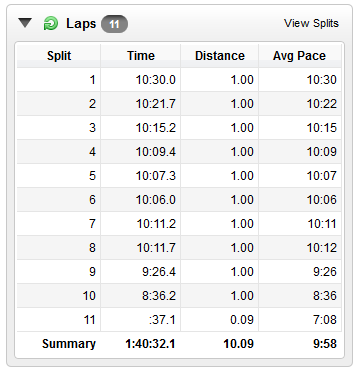 Seriously look at those splits!  I hadn't done any of my long runs nearly this quick.  At the beginning I was worried we were going out too fast.  I didn't want to burn out at the end, but the pace felt natural and every time we tried to slow down, we ended up around the same pace anyway.  It ended up working out, because I felt great throughout.  And look at the last 2 miles!  Holy moly!  My official race time was 1:40:32 as well and I placed 21,425 out of 33,988, not too shabby!  I think the distance on my Garmin ended up being a little over 10 because we rounded city hall on the outside, something to think about for future races.

The aftermath was crazy, there was no cell phone service since everyone and their mom was trying to meet up with someone, and it was mobbed.  I wandered around for a while and ran into Ricky, someone from my Tuesday night group runs, and a neighbor from college!  Eventually we all found each other and headed back to FDR park for some tailgating. 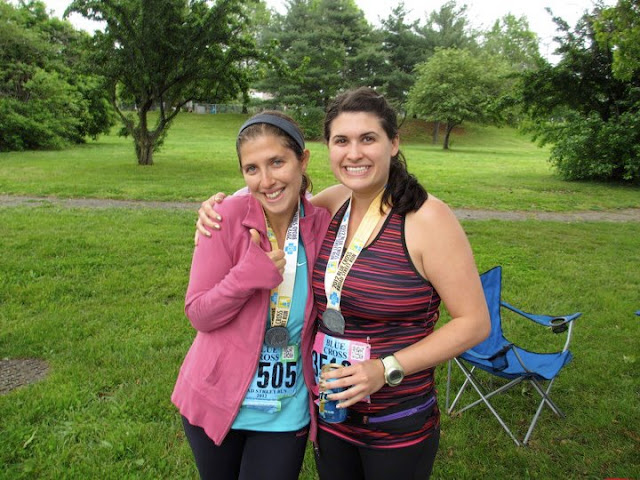 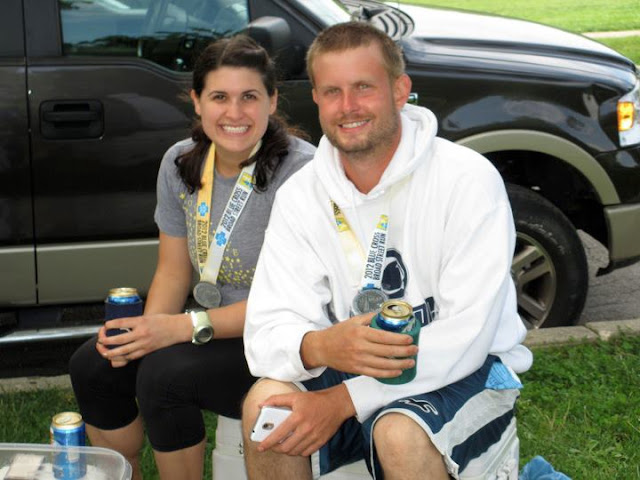 And then the rest of my day was spent doing a lot of this. 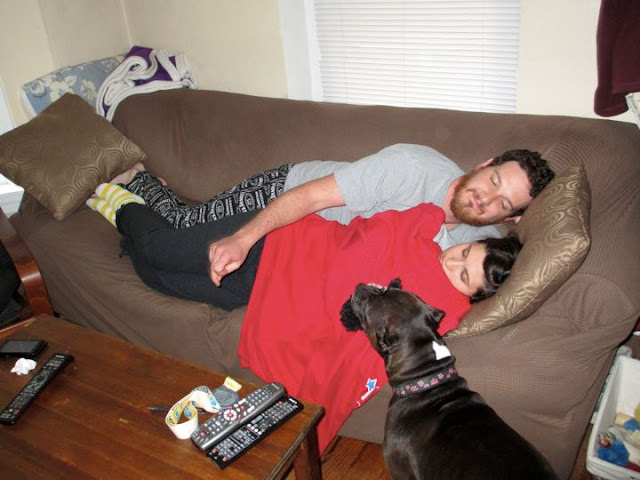 (I'm pretty sure Dave is snapping to get the dog away from licking my face and waking me up!)

So that was Broad Street!  It was a great success and I'm definitely feeling ready for the half.  And for some weird reason my knee doesn't even hurt today.  Win!
Posted by Amber at 9:51 PM