I'm in the second trimester now and things are pretty uneventful.  Weird smells can get to me and I'm still gagging once in a while brushing my teeth or swallowing my prenatal, but otherwise I feel pretty normal.  I am fairly tired on a regular basis though, but that could also be a product of doing too much... which is the story of my life.

We had Michelle's bridal shower on Saturday so I started my day at Produce Junction at 8 am to put together floral arrangements.  Then I headed to my parents with Vienna and a car full of shower stuff.  The shower was lovely and I was very happy to celebrate Michelle... but I'm glad the bachelorette party and shower are both over and I'm done planning parties until #2's first birthday. 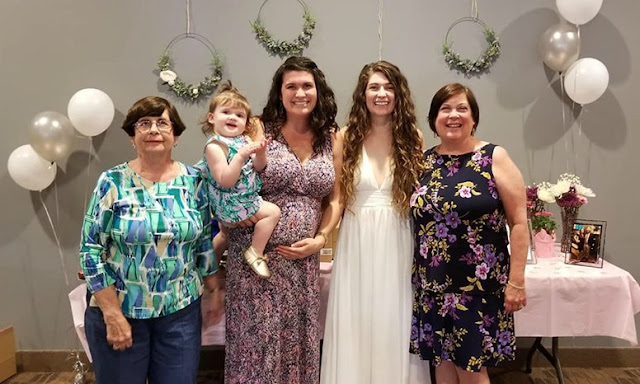 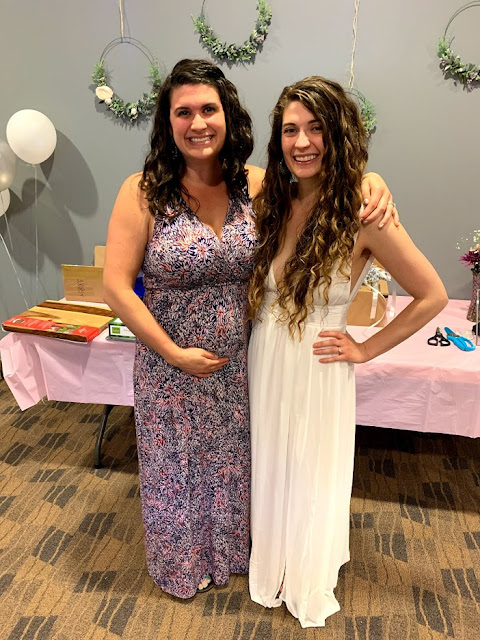 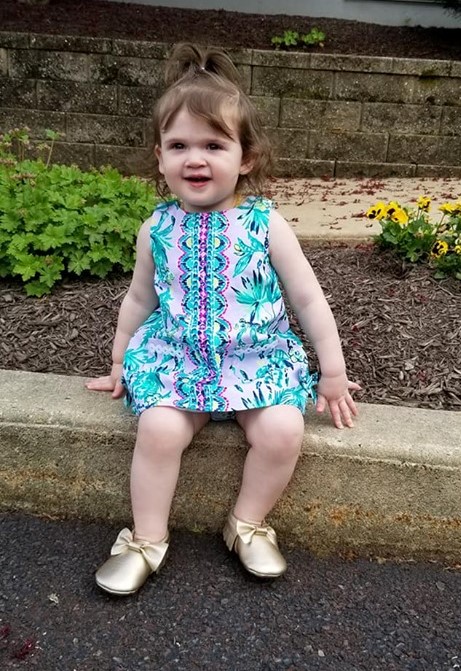 After the shower I hung at my parents for a little and then headed out for a sushi dinner with the gals to celebrate Leah's bday.  I was a naughty preggo and indulged in some raw salmon.  It was delicious and so worth it!  We stayed at dinner for 3 hours until we were the last people in the restaurant at 10 pm.  To say I was pooped was an understatement... 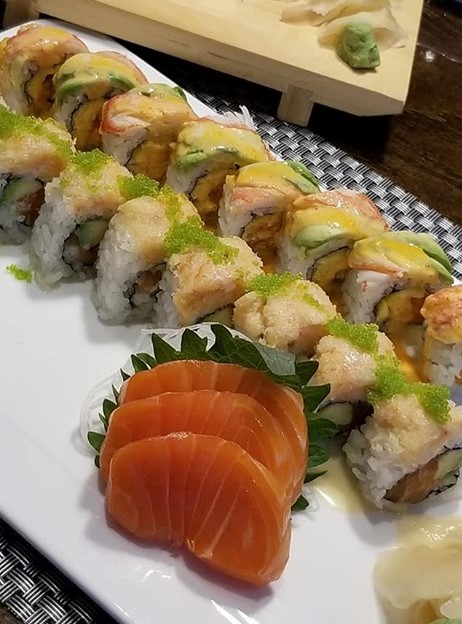 So then Sunday I woke up at 5:50 am.  No alarm, no baby, just my body being a jerk.  Then at 8 am, I hit the gym and completed the hero WOD Murph.  This was my 5th Murph and my second one pregnant!  I followed the same modifications I made last time: 1.5 miles on the bike (instead of the 1 mile runs) and I did the push ups on my knees.  I thought about doing a half, which I did last year because I wasn't going to the gym super consistently, but I felt like I had more in the tank after I finished the half and had some regret.  Plus I wanted to match what I did during my last pregnancy, especially since I was 22 weeks pregnant last time!  I thought a few other people were going to show up to do it with me (the gym typically does it on Memorial Day, but we're always down the shore, and I usually do it at 6 am the Friday before but the coach who usually runs that was getting married that weekend), but nope!  Just me! 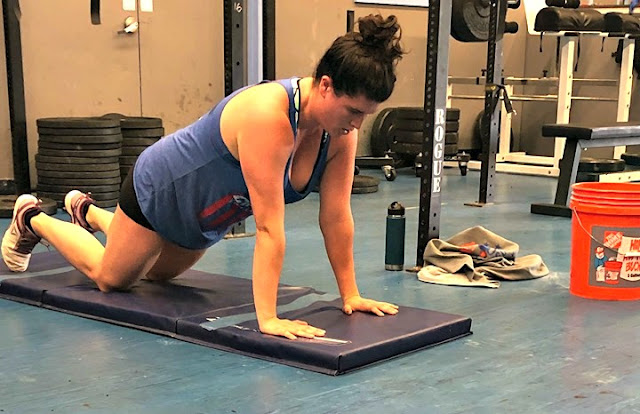 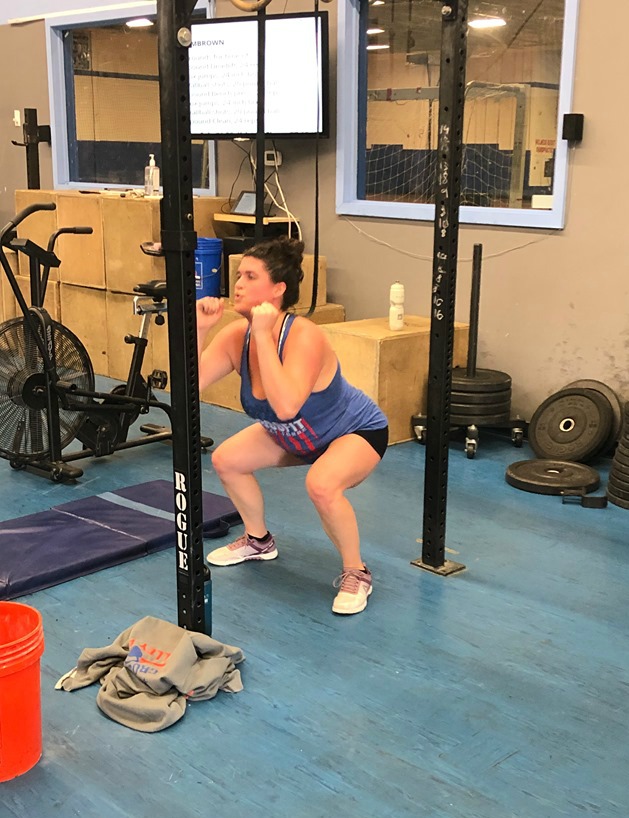 The first half was pretty uneventful.  I chipped away at the rounds (20 rounds of 5 push ups, 5 pull ups, 5 push ups, 15 air squats) and I felt pretty good.  The biggest challenge was the pull ups.  It was pretty warm and I guess humid because the pull up bar was very moist and hard to get a good grip on.  I love using chalk, but my coaches encouraged me not to use it to avoid ripping my hands. 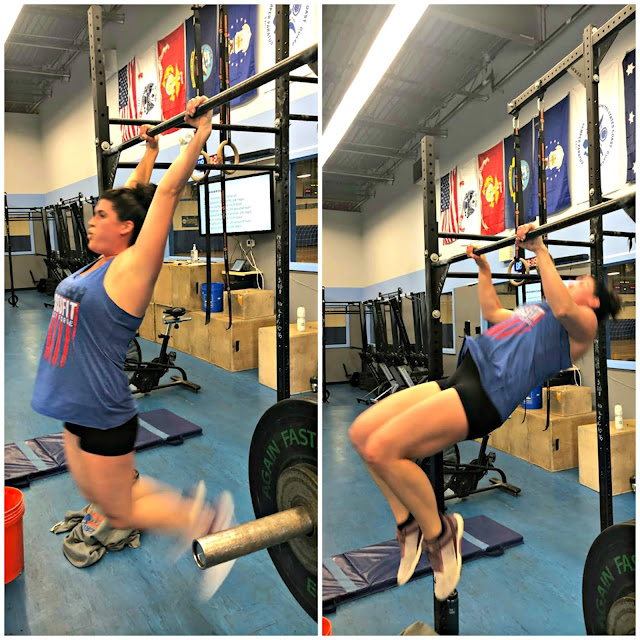 Around round 13 I feel like I hit some kind of wall.  I had more than a few rounds left and although my muscles felt ok, I just felt exhausted overall and really had to fight through mentally.  I knew I finished in 58:11 last time, so my biggest motivation to keep moving was to beat that time.  The pull ups were getting very difficult so I finally got into the chalk on round 15 and ripped both hands immediately!  At least I only had 25 pull ups left.  I kept counting down each round in my head... only 20 left, 15, 10, 5... done!  I got on the bike and the 1.5 miles seemed to take forever, but I finished and flopped onto the floor at 50:25! 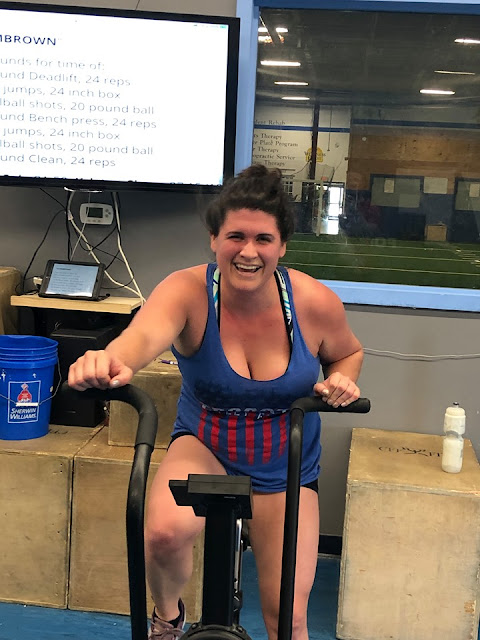 Sometimes I think I'm so out of shape and dream of how fit I could be if I could ever actually commit to going to the gym 4 or 5 times a week, but I have to say I felt super strong throughout the whole workout!  In previous years my muscles have been super fatigued, my quads have cramped, and I haven't been able to walk for days after.  This year I completed all the reps without much struggle and my legs were barely sore at all. 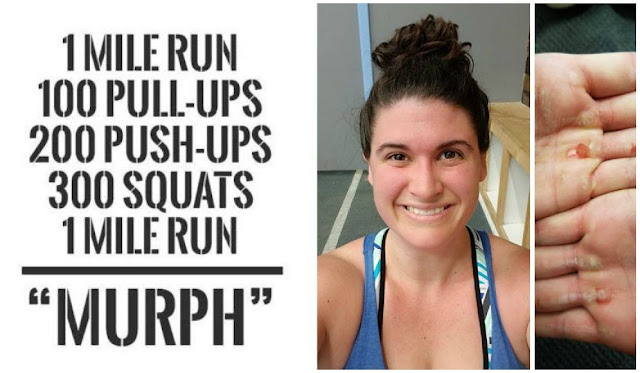 Between the events of the day before and completing Murph, my Sunday was pretty much shot.  I ended up feeling pretty crappy and had a dull headache for the second part of the day.  I would've gone to bed super early, except I had to stay away for the end of Game of Thrones!  Still wish Jon and Dany just got married and lived happily ever after lol. 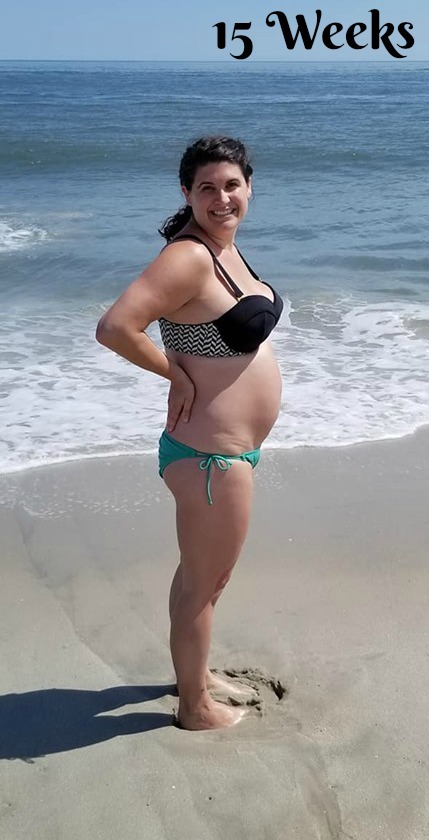 I can't believe how big I am already.  I knew I'd show earlier this time since my body had already done it once, but geez!  I'm trying to avoid gaining 60 lbs this time around, but I'm not sure it's working lol.  I had really big gains from 16 to 20 and 20 to 24 weeks last time, so I guess it's a good time to focus on those veggies.  I finally pulled out all my maternity clothes and I could not be happier.  Everything is so much more comfortable and I forgot how cute everything is!

I skipped the gym completely this week.  I was so exhausted from last weekend that sleep took priority and I felt like completing Murph last week gave me a pass.  We also spent a good chunk of the week in Cape May for Memorial Day weekend.

Vienna was such a beach babe, the weather was awesome, and we had a wonderful time.  My in-laws are great, they help so much with V and spoil us with delicious food.

I did struggle after a late night out on Friday when we got back from the bars at 1 am and V was crying on and off, which is not like her at all.  I wasn't sure what to do because she would cry for a minute and then stop and she never really looked like she was actually awake, so I didn't want to rock the boat even more by going in.  But after a few times I took a bottle in and went to change her diaper and her arm felt ice cold.  I think the poor thing was just cold in the pumping AC, so I put her in more layers and that was that.  Then I finally got in bed and was almost asleep when Dave had a sneezing fit!  I think I finally got to sleep around 2:30.  Thankfully Vienna slept in a little, but 7:30 still came way too quickly and I was feeling rough.  After breakfast Dave took V for a bike ride and I went to take a nap.  When I woke up, I didn't feel super refreshed so I thought I slept for 20-30 minutes.  Turns out I took a 3 hour nap!  I still didn't feel 100% until I went to bed fairly early and got a decent night of sleep.  We stayed out kinda late on Sunday night too and I felt pretty good until the end of a long car ride home, entertaining a cranky baby who stayed on the beach all day instead of taking a real nap.

I'm looking forward to being home this coming weekend and not compromising on sleep, although I think we are finally going to start working on V's big girl room.  She's getting evicted from the nursery (so I can utilize the queen size bed again with baby #2) and we're going to redo the office.  We didn't really do much with that room when we moved in and quite honestly it's turned into a dumping ground for boxes of diapers and bins of baby clothes, so it's time to clean it out and do some painting!  Dave's so excited (lol he's not).  I have a few ideas for her room, but I'm not sure what color to paint it.  I'm anti pink, Dave's anti purple.  The man is crazy if he thinks there will never be a purple room in our house.  I'm thinking maybe a mint green with white and gray accents, maybe even some pink.  I don't think Dave's a fan of the mint walls either though.  I really feel like he just wants to paint every room in our house a nice neutral gray, but I think we all know how that's going to work out for him :)