Wow, I can't believe I've been blogging for a whole year tomorrow!  Over the past year I've learned a lot about blogging, photography, and myself.  The blog world is so great for keeping yourself accountable, getting advice, and just for general support.  I've really enjoyed writing and I hope you enjoyed reading along

Thank you so much!

Last night Dave and I ran the Moyer 5K!  I thought the race started at 6 so we got there at 5:30, but apparently it didn't start until 7.  Boo to the website being unclear but it wasn't too big of a deal.  Dave's tummy was rumbling so we walked over to Wawa to pick up some race fuel, did a few laps around the park, and hit the porta potties.  Oh funny story, while we were standing at the porta john's some kid is standing there with the door open kinda looking lost and then he goes, what do you do if you drop your cell phone in?  Bad day!  Fortunately, there were dog waste baggies right there so he grabbed a few to use as gloves and put his phone in.  Needless to say, we did not stay to watch that situation go down!

After doing a little warming up and stretching, we headed to the starting line.  We wanted to be fairly close to the start since there was no chip timing, but we didn't want to be too close and get passed by everyone.  We found a nice spot and before we knew it, we were off!  We went along with the mob around us and started off rather quickly.  I was worried we started too fast, but as everyone spread out, we seemed to easily maintain the 8:50 pace we were running.  Mile 1 flew by pretty fast! 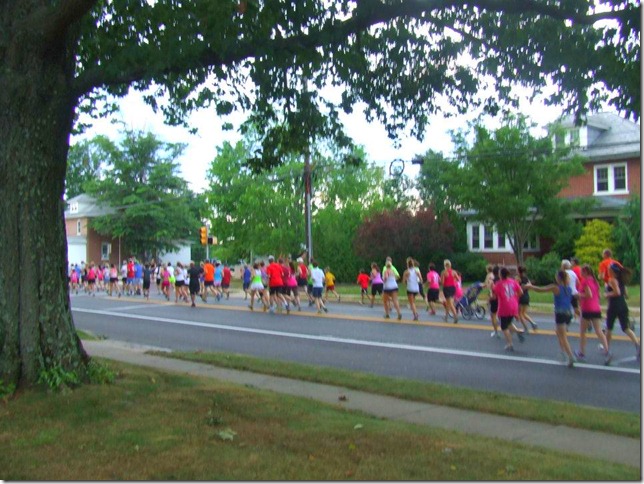 Mile 2, not so much.  The second mile began with a mild steady incline and I ended up with a side stitch.  We continuously slowed our pace and eventually I felt a bit better.  And then Dave got a side stitch.  We kept chugging along and had to run another long mild incline.  Thankfully it was super cloudy so the sun wasn't beating down on us, but we were definitely feeling the heat.  A couple of residents had their hoses out and we ran through every one!  It was pretty cool because the race was right through my neighborhood.

As the third mile approached I just kept thinking, in 10 minutes I will be chugging water and eating a popsicle!  After we had to run the steepest part of the course, we came up to the local firehouse which had one of their big hoses mounted on top of one of their trucks!  The water felt amazing and they had a guy playing the bag pipes!  That's when I knew we were done the hills, the crowd support picked up, and I could feel the finish line getting close.

As we hit the last 0.1 mile stretch Dave and I took off.  We both wanted to beat our times from March and I was so pumped when I saw the clock that I let out a "YEAH!"  We finished together, both PRed, and it felt so good! 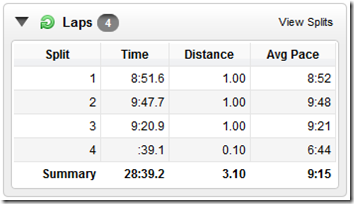 Do you have any races coming up?  Do you like running small local races or big popular ones?